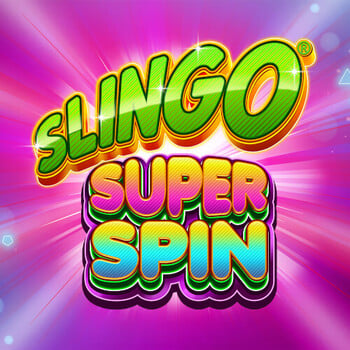 Slingo will be releasing Slingo Super Spin in the first quarter of 2022 so Slingo slot game enthusiasts need not wait long. Supplying players with a 5 by 5 layout, 25 compartments containing numbers are presented to the player on the screen. At the bottom of the boxes, players can see 5 squares containing the reels of the Slingo Super Spin online slot. Numbers on the reel that can match those on the 5 by 5 map layout appear and the aim of every player is to make as many rows as possible of stripped numbers. The more lines the player can get, the higher their price. Cash prizes are awarded to players for 4 or more completed Slingos. Players are given 10 spins to match the numbers on the reel with the numbers the player can see on the grid. Players can then press the collect button to end the game at the current prize level. In the Slingo Super Spin game, there are 12 win lines as well as 11 awards on the paytable. The game is said to have a variance of low to medium.

These are quite a few special symbols in the Slingo Super Spin slot game. Wilds allow the player to mark any number in the columns. This way, players can complete rows as needed. X symbols on the grid are blocking symbols and do not affect the grid. Super Wilds on the other hand allow players to mark any of the numbers in the grid.

Extra Spins in the Slingo Super Spin game become available after each game. Prices in this feature may be in excess of the player’s base stake and is dependent on the state of the grid and potential prizes. Players can then control the extra spins using the play controls. You can see the price of the next spin on the spin button. The potential wins that are available on the next extra spin can be seen displayed in order.

Slingo Super Spin slot online’s Super Spin reel gives players an extra chance to mark the grid. Duplicate numbers that appear on the super spin reel as well as the normal reel award the player with a super wild.

If the player can get six Wilds or Super Wild symbols on a single spin, they are awarded a cash prize.

Genting Casino offers interested players a lot of fun and excitement in the form of lots of table games and live casino games. Among these games is the upcoming release from Slingo. Slingo enthusiasts can play Slingo Super Spin slot once it releases in the first quarter of the year 2022. Experience Slingo’s signature style of a 5 by 5 grid in this new release. Come and play Slingo Super Spin on Genting Casino when you log in to their website. Whether it be on your phone or your PC, Slingo Super Spin is available for players from the comfort of their own home on their preferred device. What are you waiting for? Visit Genting Casino today!