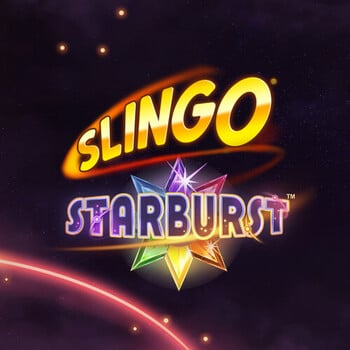 Produced by
Slingo
Slingo Starburst online slot is played on a 5x5 Slingo grid with a single row of 5 reels. Your goal is to work your way up the Win Spin ladder and win payouts of up to 1,500x your stake. The game has an RTP of 96.66% which is above the market average. It offers a wide betting range that starts with 0.10 and goes up to 100. Slingo Starburst slots have low to medium volatility which usually means a good frequency of low value wins mixed with rare high ones.

In terms of design, the Slingo Starburst slot machine remains completely faithful. It uses a 5x5 grid with random numbers scattered across it is presented to you. Along the bottom of the grid is a set of spinning reels that display numbers.

A star will be displayed if a number on the reel matches a number in the same column of the Slingo grid. You'll win a prize if you complete all of the numbers on a Slingo Win Line. Along the left side of the reels, there is also a prize bonus meter. Depending on how many Slingos you get, you'll move up the meter, giving you the chance to win Win Spins.

A Win Spin is a free spin on the original Starburst slot machine. The spin you have on Starburst is guaranteed to have a win involving that symbol, depending on which symbol is shown. Obviously, a full house and a win spin with the wild are the best outcomes.

The Slingo Starburst slot game offers classic Slingo features and The Win Spin Bonus Ladder is what distinguishes this game from the crowd. The bonus ladder is located on the left side of the screen and displays the prizes you can win from consecutive Slingos. 3 Slingos are required to reach the lowest prize in the Slingo Starbursts game.

You'll win Full House and advance to the top-paying Bar symbol if you land 10 consecutive Slingos. Simultaneously, you'll receive Expanding Respin Wilds, which means that any wilds that land during the Win Spin feature will expand to cover the entire reel. The rest of the reels will then respin, just like in the original Starburst slot, and you can get up to three wild respins.

What is the maximum bet for Slingo Starburst?

The maximum bet for Slingo Starburst is 100.

What is the minimum bet for Slingo Starburst?

The minimum bet for Slingo Starburst is 0.10.

Can I play Slingo Starburst on mobile?

Yes, you can play Slingo Starburst on any android or iOS device.

What is the RTP of Slingo Starburst?

What is the biggest potential win for Slingo Starburst?

The biggest potential win for Slingo Starburst is 1,500x your stake.

Slingo Starburst is playable at Genting Casino. The site offers an excellent selection of slots, table games, and live casino games. Genting Casino online allows you to enjoy these games at the comfort of your own home using any device. Slingo Starburst made great use of the most popular slot machine and combined it with the Slingo system. If you are a new player looking for a unique game or a long-time fan of the Slingo system then this is absolutely recommended.