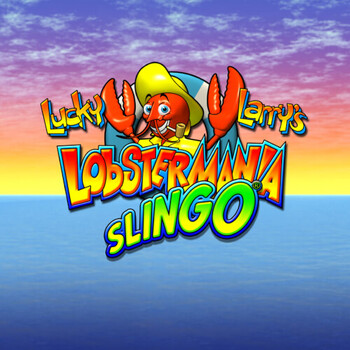 Make a splash and dive into the blue waters of Slingo Lobstermania.  Whether you enjoy playing slots or bingo online, Slingo is a hybrid game that brings the best of both in one action-packed fishing expedition. The game is set in a 5x1 reel, a 5x5 Slingo grid which looks like a virtual bingo card, and a ladder. Help Larry move up the ladder to collect bonus features along the way. Haul in some lobsters and shellfish with a bet starting at 0.10 up to 100 coins.

The aim is to complete all 12 possible Slingo paylines. Spin the reel and land numbers that match the corresponding numbers on the 5×5 grid.  Each round consists of 10 spins, and five numbers in a row is a Slingo. Indefinite extra spins can be bought if you fail to complete the grid, and get enough slingos to win a bonus feature. Watch out for four special symbols below the slingo grid. The blue wild marks off any number on the above row, while the golden wild marks off any given number on the grid. The free spins symbol awards one extra spin. Catch a Lucky Larry Bonus with five or more slingos, either in free spins or a buoy bonus. The number of spins and prizes increase as you move up the pay ladder.  Each symbol landing on a reel can display a jackpot overlay awarding one of three jackpots, namely Light Trap, Full Trap and Motherlode. They award 50x, 150x, to a hefty 1000x the bet, respectively.

Win the Buoy Lobster fishing bonus where you’ll choose between Maine, Australia and Brazil to pick buoys from the ocean. While in Maine, choose a pelican to potentially win a cash prize.  Pick kangaroos in Australia which award multiple cash prizes. Dive down in Brazil to pick treasure chest cash prizes guarded by a giant octopus.

Get a whole lot of lobster action by registering to Lucky Larry’s Lobstermania Slingo on Genting Casino. Remember to set your limits and stick to them.  Stay in control and gamble responsibly.