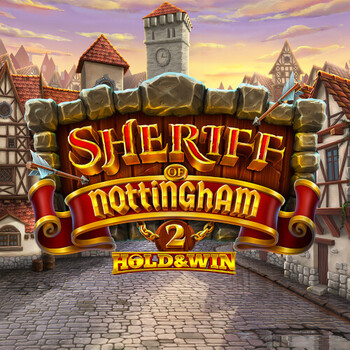 Produced by
iSoftBet
The Sheriff of Nottingham 2 slot online is a 5-reel, 3-row slot with 20 fixed paylines. The stakes range from 0.20 to 20 per spin. While it may not be suitable for high-stakes players, the range is broad enough to accommodate most player limits. The RTP for Sheriff of Nottingham 2 online slot is a flat 96%, which is the industry average. In terms of volatility, this game falls somewhere between medium and high. The maximum payout is 7,515 times your stake.

About Sheriff of Nottingham 2

When you play Sheriff of Nottingham 2 slot the theme revolves around Nottingham and the legend of Robin Hood. The reels are set in Nottingham's old cobblestone streets, and the visuals are simple and not overdone. The effects of the symbols appearing in the base game and during the bonus features contribute to the overall appeal.

The soundtrack is typical of a fairy tale story, with slow but thumping audio playing as the reels spin. When a bonus feature appears, this accelerates and intensifies.

The lower-paying symbols on the reels are the A-10 Royals. A scroll, axes, swords, and a red and gold icon are among the more valuable ones. The red and gold icon pays the most, awarding 2, 5, or 25 times your stake for combinations of 3, 4, or 5.

The Wild card in the Sheriff of Nottingham 2 game is a picture of the sheriff. It can substitute for all symbols except Money and appears on all reels.

The Sheriff of Nottingham 2 slot machine has a plethora of extras, the majority of which are divided between the Pick a Scroll feature and the Sheriff Respins Bonus.

This Pick a Scroll feature can be triggered at any time during the game. When this happens, three scrolls appear on the screen, and players can select one of them to reveal a modifier:

Sheriff of Nottingham 2 at Genting Casino

You can play Sheriff of Nottingham 2 at Genting Casino. The site holds a great selection of slots, table games, and live casino games. Visit Genting Casino online to enjoy these titles at the comfort of your own home while using any device. Sheriff of Nottingham 2 slot game has great graphics and excellent gameplay. If you are a beginner that is trying to get into slots or a long-time player who enjoys games with many features then this is for you.