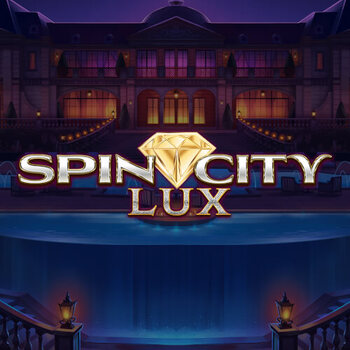 Produced by
Games Global
Enter the glorious Spin City for a luxurious experience filled with the elites of society. The lifestyle of the rich and the famous is often a perfect setting for online slots. It has been depicted in many shapes and sizes, and now is the turn for GONG Studios and Games Global in the Royal League Spin City Lux game. Play Royal League Spin City Lux and discover a regal slot game with plenty of spinnin’ surprises including the sky-high RTP and the maximum wins of 10,000x the bet.

Royal League Spin City Lux slot game has a clearly defined 5X3 grid with 15 symbols in total that include luxury items, fast cards, dice, diamonds, and bars of gold. You know – all the usual stuff that excites wealthy socialites. The controls are easy to spot and overall, the Royal League Spin City Lux slot online is very easy to play. If you need help, the guide can be accessed on the left.

The slot’s 96.9% RTP is far higher than expected for medium variance slots. You can win across 20 paylines and it has free spins and multipliers leading to glorious wins of up to 10,000x your stake.

On the reels, all the symbols related to the glorious lifestyle with fast cars, gold bars, diamonds and a whole host of casinos leading to even bigger wins.

The music in this Royal League Spin City Lux online slot is quite funky with a whole host of guitar noises mixed with bass. Alongside this, there is a voice-over from the chosen character to add a little bit of life to the slot.

The biggest feature in this Royal League Spin City Lux slot machine has to be the Royal League Jackpot that is triggered on any base game spin. There is a colourful grid of 49 tiles with two dice that roll to determine the location and number of steps. This is where one of the four jackpots can be won.

Spin City Lux has a couple of variants of free spins that it could trigger. Fairly high multipliers are available for some of them. To get that choice though, you first need the Spin City Lux logos landing scattered at the same time, somewhere on the 1st and 5th reels. The options given to you will bring either 5, 7, 8, or 12 free games. You then make a pick between four objects, and those will decide what the multiplier will be like, with options of 2x, 3x, 5x, and 10x.

The way to get more free spins is by landing new bonus symbols, as each one adds 1 round to the total.

There is also a scatter, with the three characters in it (one being selected as a lucky character), and it will pay when it lands on the reels (up to 40x the stake).

Play Royal League Spin City Lux slot at UK’s most trusted online casino, Genting Casino. At Genting casino, new players get to have a 200.00 sign up bonus. All games at Genting casino are optimised for a fantastic gaming experience online. Which means, players get to play their favourites at their own leisure.