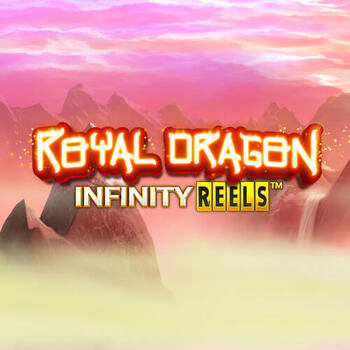 Join the frenzy, test your luck in hunting the phoenix to get awesome rewards.Royal Dragon Infinity Reels starts on a 3 reel, 4 row machine. Win by landing the same matching symbols on reels 1-3. Those symbols freeze and a 4th reel is added. Land new matching symbols on that 4th reel it also locks and another reel is added. Betting ranges from 0.30 up to 75. It has a nice Return to Player Rate of 95.85%.

On the reels you’ll see playing card suit symbols alongside a lotus flower, a red lantern, a frog, a fish and a golden statue. The phoenix is the most rewarding symbol, paying 8x your stake land 3 in combination. The dragon of the title is the wild. There’s also a gong that’s the scatter symbol.

Each spin starts with a 1x multiplier. When a new reel is added, the Symbol Multiplier feature is triggered. The multiplier increases by 1 with no limit to how high the multiplier can go.

Say for example, if you land 3 frog symbols on reels 1, 2 and 3 you’d be in line for a 3x stake reward. If you landed another frog on the newly added fourth reel, that 3x stake payout gets a 2x multiplier boost to give a 6x stake reward.

Frenzy spin is rewarded randomly. This rewards a 2x, 3x, 4x or 5x multiplier which is applied to that spin. If you land a standard reel multiplier on a Frenzy Spin, the value of the multipliers is combined which can deliver some knockout action.

If you manage to land 12 reels, you’ll trigger the game’s Jackpot feature which is worth 200x your total stake. Manage this on a Frenzy Spin and it benefits from the multiplier boost. This means a 5x multiplier would give you a 1,000x stake jackpot.

Register to Royal Dragon Infinity Reels on Genting Casino to play. Available on all mobile devices.  Winning isn't everything, remember to step back once in a while and mind your budget at all times.