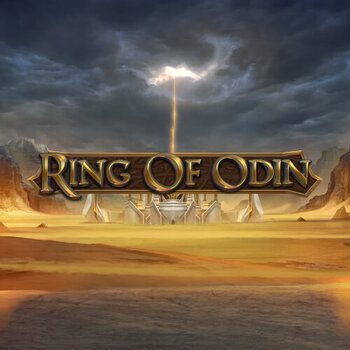 Produced by
Play N Go
The Ring of Odin slot online is a 5 reel, 3 row slot with 10 fixed paylines and a slew of interesting features such as free spins, multiplier spins, and Draupnir respins. You can place bets ranging from 0.10 to 100 coins per spin. Ring of Odin online slot is a Play'n GO high-volatility game with a 96.20 percent payout percentage. Ring of Odin slot game has a maximum payout of 5,000 times your stake.

About Ring of Odin

Smooth visuals complement the fixed illustrations. Ring of Odin game contains a number of Odin's accessories, including ravens, a grim one-eyed stare, and the ring itself. Let's just say the theme is handled appropriately for the main character. Three or more matching symbols landing left to right on any of the ten paylines form winning combinations. The symbols are a little creepy, but they nicely represent the theme. Four Runic engravings on green, purple, blue, and red stones are on the lower side. Wolves, ravens, the eight-legged horse, and Odin's spear Gungnir are the highest paying at 30 times the stake for five.

The action is set against a rocky landscape and focuses on Odin, the Norse god of wisdom, poetry, death, divination, and magic. His mystical ring Draupnir has the power to multiply itself, providing you with chances to win big on the reels.The game has an impressive visual display that is complemented by excellent gameplay.

The Ring of Odin slot machine has four bonus features. You can use the Odin's Ring feature to get a respin with a specific symbol. If Odin multiplies into 9 rings, the Draupnir Re-Spins feature with a Mega Symbol will award up to 9 re-spins. There's also a Foresight Free Spins feature, which activates the Odin's Ring feature for each free spin. Finally, there is the Multiplier Free Spins feature, which allows you to play with a multiplier of up to 9x.

When the Ring appears in the centre of the reels, the Odin's Ring feature is triggered. The selected symbol is the symbol that lands in Odin's Ring, and a single re-spin is awarded.

Odin's Ring then multiplies into 9 rings, which cover the three middle reels (i.e. reels 2, 3 and 4). When the reels stop spinning, any chosen symbols that appear inside the rings are re-spun. The Draupnir Re-Spins feature will then be activated.

The chosen symbol is duplicated into a Mega Symbol with up to 9 re-spins available (1 for each symbol). This consists of 9 identical 11 symbols that remain sticky on the three middle reels until the re-spins are completed.

Ring of Odin at Genting Casino

Ring of Odin is a highly entertaining game available at Genting Casino. Genting Casino offers a great selection of slots, table games and live casino games. You can visit the Genting Casino site and enjoy any of these games at the comfort of your own home. Ring of Odin is loaded with features that keeps new players interested and high-rollers engaged. The max possible win of 5,000x your stake is attractive to many players.