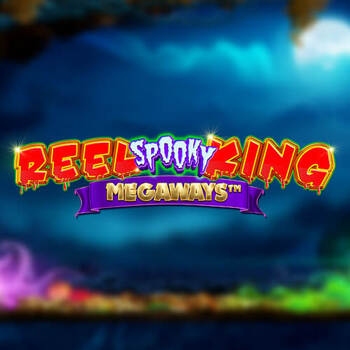 Halloweeny but in a charming way. Reel Spooky King Megaways will take you to a haunted environment with lots of charming symbols. It is a 6 reel panel holding up to 7 symbols on each reel, with 4-symbols upper reel utilized with up to 117,649 winways. It has a nice Return to Player Rate of 95.56%. Betting starts from 0.20 up to a maximum of 20.

Landing matching symbols across adjacent reels starting from the left side give rewards. The cauldron symbol is the most valuable at 50x the bet for six of a kind, followed by A to 9 royals, then critter watermelons, plums, and cherries. Wild witch-hats appear on the four-cell upper reel to replace symbols in the base game or free spins.

Cascades, every winning combination is part of a win chain reaction. Winning symbols get removed from the board, replacing new ones from the reels above. It keeps going as long as you get consecutive wins, if not the feature will end.

0-6 reels light up yellow from left to right with a 'Ding' sound on base game. One extra reel is lit yellow for each subsequent cascade and achieving 6 yellow reels triggers the Reel King feature. One further cascade past six will trigger the Super King feature, while one or more from here triggers the Spooky King feature.

If the Reel King, Super King, or Spooky King feature has been triggered, then 1-2, 2-3, or 3-6 mini-slots appear over the reels, respectively. If a free spins position has been reached when this happens, It will trigger Free Spins bonus.

Free spins come with an unlimited win multiplier that increases by 1 following a winning cascade.

The Spin Chance automatically triggers if your balance falls below the current spin cost yet is greater than zero.

Register to Reel Spooky King Megaways on Genting Casino, playable on all mobile devices. Maintaining a good balance in playing and resting is key. Always set your limits.