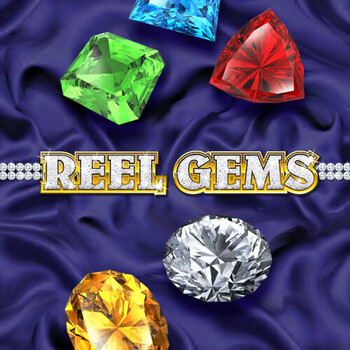 Produced by
MicroGaming
The Reel Gems slot, which has five reels and three rows, was created by Microgaming Software. On these magical reels, there are 243 ways to win. Free spins and a respin feature are just two of the bonus features in the Reel Gems game. The 96.52% RTP of the Reel Gems slot game makes it an above-average RTP online slot with a medium variance. Players can place bets ranging from 0.01 to 0.5 per spin in order to win the game's maximum payout of 120,000 coins.

When it comes to the reel set of Reel Gems, it's good to know that it's filled with both low-value and high-value symbols. The low-value symbols Reel Gems slot online include six standard playing card symbols: 9, 10, J, Q, K, and A. For combinations of three, four, or five matching symbols, they all pay out. They come in a variety of colours and with a unique gem twist. Five different colored gems make up the group of high-value symbols. On the reels, you'll find gemstones in the colours yellow, blue, green, red, and grey. The first three pay out for three, four, and five matching symbols, respectively, while the remaining two pay out for two-symbol combinations. There are two additional symbols in Reel Gems online slots, the Reel Gems wild, which only appears on reels two and four, and a diamond ring, which is used to activate the game's re-spin feature.

Reel Gems slot machine includes a few extra features. Free Spins feature, you can earn 15 free spins by landing at least three diamond ring scatter symbols anywhere on the reels. All wins landed during this feature will be multiplied three times, and the feature can be re-triggered for even more free spins. The Reel Gems Re-Spin Feature allows players to re-spin any of the game's five reels after the spin has ended. The cost of this extra spin, known as a re-spin, is proportional to the amount of the potential win, so use this bonus feature with caution. Also, only wins involving the re-spun reel will be paid out.

At Genting Casino, you can play Reel Gems alongside a wide range of other slots, table games, and live casino games. These games can be enjoyed from the comfort of your own home or wherever you are on any device. From fun wilds and bonus rounds to large payouts and a cool theme, Reel Gems has everything players are looking for. It works well on both computers and mobile devices, and it has some nice graphics and visuals.