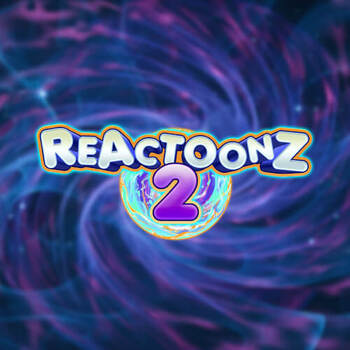 Produced by
Play N Go
Reactoonz 2 slot game is a cascading video slot game with a 7x7 grid. This is the latest iteration of the first Reactoonz game from Play'n GO. Getting 5 or more like-faced alien symbols in a cluster results in a win. These are deleted, and the grid is filled with new symbols. The Cascades continue until there are no more wins to be had. Each new round introduces a new one-eyed symbol. Get through these initial toonz to lead you to the bigger ones that carry higher values! The Reactoonz 2 slot machine is a 7x7 grid cascading video slot game. Obviously the goofy Reactoonz are back to invade the reels with their alien-looking appearance and their future tech!

The alien characters themselves represent the symbols in the game. It's a win if you get 5 or more similar symbols in a cluster. These are discarded, and new symbols are placed on the grid. The Cascades would continue until no more wins are available. With each new round, a new one-eyed symbol is introduced.

The Reactoonz are out again in the Reactoonz 2 slot game and they have several bonus features to show for it.

Electric Wilds don't appear on the grid; instead, they appear whenever the Fluctometer's chosen symbol (more on that later!) forms a winning cluster on the grid; you get one Wild for each cluster that symbol creates.

Electric Wild will let you construct more clusters by substituting for any Reactoonz. The cluster will vanish every time it does this, and the Electric Wild will also zap all instances of that Goon from the grid at the same time!

A few things can happen if two or more Electric Wilds are left on the grid after this.

If two Wilds are near to each other, they will destroy every symbol on the grid (excluding any other Wilds), triggering a new cascade. If there are more than two adjacent, two are chosen at random. If no wins appear on the new cascade, but nearby Wilds remain, it will destroy every symbol once more. If there are still many Electric Wilds on the grid but none of them are adjacent, two at random are chosen and a line drawn between them. All of the symbols along that line, as well as the symbols around each Wild, are obliterated!

Uncharged wilds that appear on the grid at the start of any round. They have the ability to remain dormant on the grid and act as blockers until they are charged.

Let's move on to the Fluctometer! This is located in the upper right corner of the grid, and each round, a Lil' Goon will be chosen as the fluctuating sign.

The Fluctometer will be charged once the fluctuating sign is removed from the grid. Whether they are eliminated in a cluster or destroyed by Electric Wilds, this happens.

How to Play Reactoonz 2 Slot Online

The Reactoonz 2 slot machine is both simple and complex to play. When you land a winning combination of 5 or more matching symbols on the reels, the Cascading feature is triggered. All winning symbols will be removed from the grid and replaced with new symbols. More exciting news: the cascading feature will keep going until no more winners appear on the reels. Keep an eye out for the Uncharged Wilds that appear on the grid at the start of each spin. Until they are charged, they will be inactive and act as blockers. It's worth noting that the Uncharged wilds can be charged if a winning cluster forms close to them.

In a nutshell, all you have to do is land an electric wild during a winning cluster. An electric wild charge will erase any non-wild symbols and fill the Quantumeter.

Are you ready for four levers, huge charges, and some entertaining wins?

Energoonz are activated at levels 1 and 2. You can also refuel the Quantumeter with more symbols, which re-energizes the Energoon until you reach level 3.

The meter cannot be recharged in level 3, but you can overcharge it for a 2x multiplier on the Gargantoons.

Once you reach level 3 or the meter is overcharged, each level will play out in order.

What is the maximum bet for Reactoonz 2?

The maximum bet for Reactoonz 2 Online slot game is 100

What is the minimum bet for Reactoonz 2?

The minimum bet for Reactoonz 2 is .20

Can I play Reactoonz 2 on mobile?

Yes, you can play Reactoonz 2 on mobile.

What is the RTP of Reactoonz 2?

What is the biggest potential win for Reactoonz 2?

The maximum exposure for Reactoonz 2 slot online is 5083 times your original bet.

About the Game Provider: Play’n GO

Since its founding in Sweden in 1997, the company has released hundreds of online slots in a variety of genres and themes. The portfolio includes games about secret agents and superheroes, gemstones and graffiti artists, forgotten civilisations and ancient deities, and much more. Play'nGO is a major provider of custom, all-encompassing solutions for the online gaming industry. Play n'GO has produced goods like as their original independent platform, a variety of high-quality casino games, and mobile and tablet gaming solutions using cutting-edge technology. The executives and staff at Play n'GO have extensive industry experience, and their products are known for their quality, adaptability, and dependability. Play n'GO are well known for the great mobile compatibility of their games which include titles such as Legacy of Dead, Rise of Olympus, and Rich Wilde and the Tome of Madness.

If you liked the first game, you'll enjoy this one even more. Even if you haven't played it before, you will enjoy Reactoonz 2 slot online and there's no better place to enjoy it than Genting Casino! You can play Reactoonz 2 online slot among many other games. Genting Casino offers a huge library of slot games. You’ll be sure to find one that matches your preference.