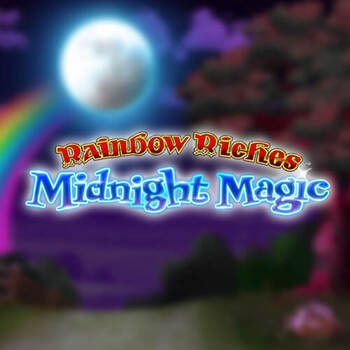 Produced by
NYX
Barcrest's richest and luckiest leprechaun is back in another Irish-themed slot in the Rainbow Riches Midnight Magic slot. The improvements made to this slot compared to other games in the Rainbow Riches Series are worth a spin. Furthermore, the slot packs different exciting features including free spins and special bonuses. Surely, these additions will make a huge difference for this online slot.

Play Rainbow Riches Midnight Magic slot online on a five-reel and four-row grid along with 10 fixed paylines. Winning lines are created by landing three matching symbols from the leftmost reel. Stakes range from between 0.10 coins and 200 coins per spin. RTP stands at 96.00%, which is considered average and medium to high variance. Rewards are stabilized in the base game and bonus rounds.

Similar to other slots from the creator, Rainbow Riches Midnight Magic slot online has a simple design with a bit of flair. It's different from the original slot since it's set at night under a giant moon. The soundtrack consists of guitar-led music with a hint of the Emerald Isle tune. Behind the reels, you can see a full moon and a rainbow.

Symbols are made up of A-10 royals, which are low-paying symbols. High-paying symbols include the rainbow, a harp and a toadstool. The most rewarding symbol is the rainbow with an up to 50x multiplier. The game logo represents the wild symbol and the two scatters are represented by the smiling leprechaun and the fairy. Play Rainbow Riches Midnight Magic slot online to enjoy these features.

Since the creator of Rainbow Riches Midnight Magic slot went for a simple slot, there are only two bonus features available. Also, expect occasional symbol upgrades. The first bonus feature is the free spins feature, triggered by the game's scatter symbol. Get three, four, or five of these symbols in a single spin for 10, 15 and 20 free spins respectively.

The second scatter can appear during these free spins and wave her magic wand to trigger symbol upgrades. If you land a wild symbol, you can retrigger the free spins round. The Super Dial Bonus Feature is the second of the two main bonus features. To get its rewards, you can double up your stake for this bonus feature round.

To trigger the feature, click the button on the right-hand corner and any time the player lands two+ scatter symbols, it will be activated. The reward is determined by spinning the bonus wheel. The player is awarded six, eight or 10 free or a multiplier from one to five. Symbol upgrades can be done on this round using the Fairy scatter.

The classic blend of a simple design with an Irish Fortune Theme makes the Rainbow Riches Midnight Magic online game exciting. It is not overloaded with more features, with the scatters and wilds giving the highest rewards. The wild can pay up to x1000 the stake. If you are looking for the richest leprechaun to challenge, then this should definitely be your slot.