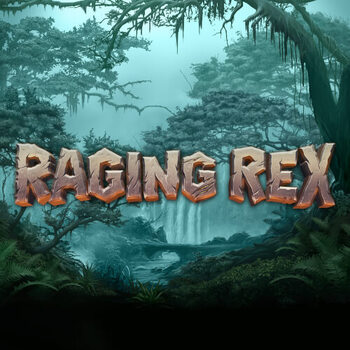 Step into a prehistoric adventure hunting dinosaurs to win awesome rewards. Raging Rex is a 6 reel slot with 4,096 winways. Bet ranges from 0.20 up to 100. It has a very nice Return to Player Rating of 96.34. The low-value symbols are represented by 6 insects encased in amber fossils including scorpions and spiders. The premiums are dinosaurs - Triceratops, Parasaurolophus, Dilophosaurus and Velociraptor, the latter being the most valuable of all symbols, giving you 7.5x times your stake for 5 of a kind. On top of the food chain is the T-Rex which is the wild, thus replacing all other symbols bar the scatter.

The Rampage feature comes into play when a full stack of T-Rex wilds appears on reels 2-6 in the base game. The stack of wilds will turn sticky and then proceed to walk one by one towards the first reel for every subsequent spin. Preferably, you want the stacks of wilds to first appear on reel 6 as it will award you with 5 re-spins. Unfortunately, this feature cannot be re-triggered.

Land 3, 4, 5 or 6 Meteor scatter symbols anywhere on the reels to activate the free spins game and 8, 15, 20 or 30 free spins are awarded respectively. Additionally, 2 or more scatters during the bonus awards extra spins with potential for unlimited free spins.

When the free spins are triggered, players are presented with two options - The Wild Hunt feature or the Primal Rage feature:

Wild Hunt - The stacked wilds are removed, and instead, x2 or x3 multipliers are added to the Rex wild symbols that can combine to multipliers up to x243.
Primal Rage - Stacks of wilds appear on reels 2 to 6 on each spin and walk to a new reel with each spin.

Register to Raging Rex on Genting Casino to play. Available on all devices. Always make sure you don’t exceed your budget and also remember to take a break every now and then.