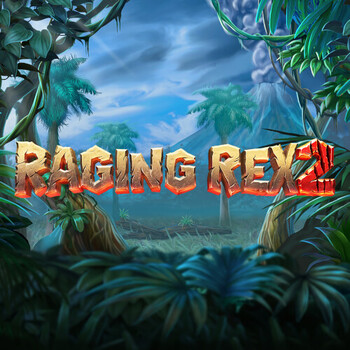 Produced by
Play N Go
Raging Rex 2 Online Slot is a medium volatility game that uses a 6x4 reels and rows system. The graphics on this game are good with great transitions. The dinosaur theme is well designed on a play area that looks like a prehistoric jungle. It also offers a large 30,000x your stake possible max win. Complete reading our Raging Rex 2 Slot Machine review to learn more about the game, its features and bonuses.

Raging Rex 2 slot game uses a 6x4 gaming grid. On 4,096 paylines, winning combos can be made. Players can place wagers ranging from 0.10 to 100 in this game. When three or more symbols of the same kind land adjacently on a payline from left to right, the player wins.

With no multipliers in the base game when you play Raging Rex 2 slot, this game offers respins and free spins, as well as additional bonuses. The game's greatest winning potential is 30,000 times the stake.

When you play Raging Rex 2 the RTP is capped at 96.20%, which is above the industry average. The volatility of Raging Rex 2 Game is medium, which may lead to more frequent, but less valued wins. On the grid, there are colourful fossilised footprints and different dinosaurs, including Brachiosaurus and Ankylosaurs. You'll also come across a vicious T-Rex and her clutch of hatchlings. The symbols are a mix of comical and semi-realistic, and a lush forest can be seen behind the reels, giving the game a Jurassic feel.

The T-Rex Wild symbol is a stacked symbol that can cover all four rows at the same time. When this happens, the stacked wild walks one reel to the left until it disappears from view, triggering a respins bonus feature. Baby dinosaurs follow the older dinosaurs in front and behind, making it much easier to complete wins. The quantity of respins is determined by which reel the stacked wild lands on initially, thus you may get 5 or just 1.

Primal Fury Wilds — Depending on the amount of triggering egg symbols, you earn 8, 12, 16, or 20 free games in which the T-Rex can move in any direction. Hatchlings may appear, but they may not stay, and more scatter symbols can retrigger up to 18 more spins.

Hatchling Mania Wilds - seven, nine, eleven, or thirteen free spins are awarded during which hatchlings remain in play and can advance in any direction. They also feature 2x or 3x multipliers, which can add up to 243x when two or more hatchlings are in a victory. Up to 12 more spins can be retriggered.

Jurassic Mayhem Wilds - This feature includes 5, 7, 9, or 11 spins during which all wilds remain active and move around the reels. More scatters award up to 6 extra spins, so whichever round you choose, the wild dinosaurs will hopefully continue to stomp around for a lot longer

Raging Rex 2 is available at Genting Casino as well as a great selection of casino games and live table games. Raging Rex 2 is a dinosaur themed game with a large possible max win and a wide enough betting range to keep new players and high-rollers interested. Fans of the theme can enjoy the graphics and transitions of the reels. It is an absolute must try whether you are a fan of the theme or not.