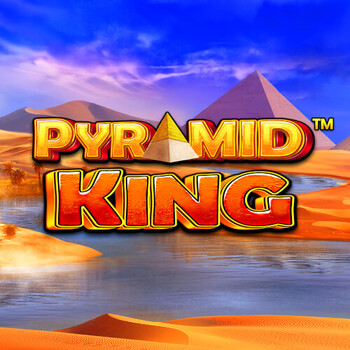 Produced by
Pragmatic
Pragmatic Play is here again with a game that will impress lovers of the Ancient Egyptian theme. It is known as the Pyramid King slot, and it takes players for an unforgettable adventure to the land of the pharaohs. What's great is that this journey isn't short of bonus features. There are free spins, expanding symbols, streak respins and jackpot cash prizes.

Meet the Pharaohs in the Pyramid King slot

Players can play Pyramid King on a grid that provides 5 reels, 3 rows and up to 25 paylines. Forming a win involves landing several matching symbols on the grid starting with the reel on the left. The slot's RTP rate is 96.5%, which is quite a solid figure. In addition, the volatility lies between the medium to high range.

The betting range of Pyramid King slot online favours all kinds of bankrolls. This is because bets begin at 0.25 coins and increase all the way to 125 coins for a single spin. Apart from that, the game also offers Autoplay and turbo modes for setting faster automatic spins. The maximum payout, which will mostly emanate from the jackpots, is 1,000x the bet.

Players will enjoy the Ancient Egyptian theme when they play Pyramid King slot. Symbols on the reels include A-J card royals alongside golden serpents, ankh crosses and ruby rings. The symbol with the highest payout is Anubis, the jackal god which pays 20x the bet for five on a payline. In addition, there is also a wild that is represented by the pharaoh.

As usual, players will find a Free Spins feature in this game. It is triggered by landing bonus symbols on the reels during a spin. As a result, a payout equivalent to the bet plus 10 free spins will be awarded. When the feature is running, an expanding symbol can land and fill a whole reel. Furthermore, unlimited re-triggers of the free spins are also possible.

Another bonus feature is the Money Respin feature. It activates when at least six of the money symbols land on the grid during the same spin. When this happens, the triggering symbols lock in place and 3 respins are then awarded. If another money symbol lands, it is also held in place with the feature continuing until all respins are depleted.

In addition, the money symbols come attached with jackpot cash values ranging from 30x to 100x the total bet. When the Money Respin feature stops, all the values are cumulated together and awarded as a cash prize. If a player manages to fill all positions with money symbols, they will win a Grand Jackpot that is worth 1,000x the total bet.

Ancient Egyptian-themed slot machines are among the most popular in the online slots world. Pragmatic Play has made a great addition to the line-up by developing the Pyramid King video slot. Feature-wise, successive retriggers of the free spins will bring more spins which means more action. The highlight, is however in the Money Respin feature where a jackpot worth 1,000x the bet is on offer.