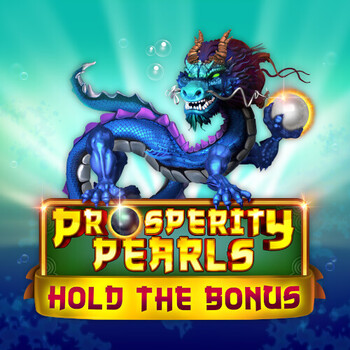 Explore the treasures of the sea with Prosperity Pearls by Wazdan.

Played on a 5-reel 5 row set up. The lowest playing symbol being a “J” symbol, followed by a “Q” symbol, then a “K” symbol, and finally an “A” symbol, a “Gold Coin” symbol, a “Pot of Treasure” symbol”, followed by a “Pisces” Symbol, and finally the highest paying symbol being a “Frog” symbol. There are two special symbols in the game, one of which is the “WILD” symbol, the “WILD” symbol substitutes for all symbols except the bonus symbol and the “White pearl” bonus symbol.

The game features a bonus in which drawing 3, 4, or 5 bonus symbols in the base game will trigger a paid re-spin; the bonus symbols will then be blocked on the reels, this will then increase the chance of triggering the Hold the Jackpot Bonus. Land at least 6 bonus symbols to trigger the bonus. All bonus symbols stick to the reels during the bonus. 3 re-spins are guaranteed at the beginning of the bonus game. Every time there is a new bonus symbol it resets the number of re-spins to 3. The game will continue until the re-spins have ended, or until all reels have been filled with bonus symbols. The “White Pearl” Symbols award prizes ranging from 1x up to 10x. Mini, Minor, and Major Pearl symbols may randomly appear during the bonus round and award 2.00 FUN, 5.00 FUN, 15.00 FUN respectively. There is the “Golden Pearl” symbol which accumulates all the values of the white pearls, then the “Black Pearl” symbol which accumulates all the values from White, Gold, and Black pearls and doubles their value. “Mystery” symbol can transform into any pearl and will open one at a time at the end of the bonus. Collecting all 25 Bonus symbols of any type awards the GRAND jackpot of 1000x the players bet!

Play Prosperity Pearls on Genting Casino available on any mobile device. Remember not to overspend and set a spending budget as well as taking a breather every now and then.