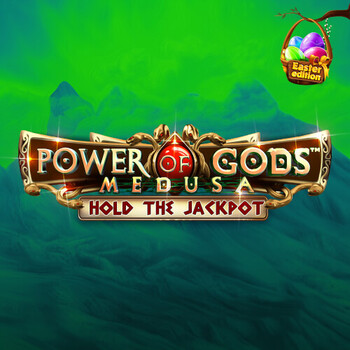 They say looks can kill, keep that in mind as you traverse amongst the Greek Gods and Goddesses in this hair-raising adventure. You are about to enter the lair of the dangerous and seductive Medusa, cursed with the ability to turn men who look at her into stone.

Power of Gods: Medusa Easter Edition plays out on a 5x3 grid with 10 paylines. Wins are compensated for combinations of 3,4 and 5 identical symbols on an active bet line, from left to right on consecutive reels. The low paying symbols are represented by tens to aces with values from 0.4x, 0.8x, 1x, 1.5x, and 2x the bet, respectively. The high paying symbols are then represented by the mythical Greek Gods Poseidon, Perseus, and Athena who pay up to 5x, 10x, and 40x for five of each. The enchanting Medusa portrays herself as the wild symbol that can substitute for any other symbol except the mirror bonus. Bonus symbols award prizes from 1x-10x, 12x and 15x of the bet.

Bonus symbols may appear as sticky symbols during the base game. These have a random value from 1-9 which count down with each spin, Once it runs out, it becomes a standard bonus symbol. Landing 6 bonus symbols activate the Hold the Jackpot Bonus where all symbols -except those used to activate it, are removed from the reel. Played on 15 independent reels, you can get jackpots by landing Mini, Minor and Major symbols. You get 3 respins at the start and reset 3 more each time a bonus symbol is drawn. Landing a Medusa symbol gathers all values from standard Bonus and Medusa symbols on the reels. At the end of the bonus game, Mystery and Medusa Mystery symbols appear one by one. Both symbols can transform into Mini, Minor and Major symbols but Mystery symbols can change into standard Bonus too. Once respins have ran out or bonus symbols have filled all the reels, the Bonus feature ends. If you get the latter, you can get the Grand prize.

With an adjustable volatility level ranging from low to high and an overall average payback of 96.18%, you can play the Power of Gods: Medusa Easter Edition slot online on any mobile device at Genting Casino and meet the gods of Greece today -but be careful not to catch Medusa’s ire.