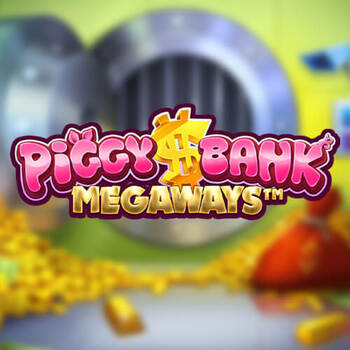 Produced by
iSoftBet
The Piggy Bank Megaways online slot is played with 6 reels and up to 117,649 ways to win. As the hit frequency rate is 32.3%, winning combinations will appear on average every 3.09 spins, which is high given that this is a Megaways slot. It is playable for 0.20 to 20. The RTP for Piggy Bank Megaways slot online is 95.98%, which is slightly less than the 96% average for online slots. The volatility is medium. The maximum win per spin is 12,000x your total bet.

Then there is the Wild 3 Pigs symbol. It can replace all of the above-mentioned symbols when it appears on reels 2, 3, 4, and 5 only—not the outer reels. The main bonus feature is initiated by the scatter, which in this case is the Gold Piggy Bank Coin symbol.

When you play Piggy Bank Megaways you most-likely will encounter the Cascade feature. The cascade feature is activated whenever a winning combination lands. The corresponding combo is removed from the grid, and new symbols cascade down into the empty positions. This can result in a string of wins that only ends when no new winning combinations appear. When the sequence is completed, the accumulated win is paid out.

Two features may appear at random on any base game spin, as indicated by the screen darkening to indicate their arrival. Max Megaways forces seven symbols on all six reels for the current spin, allowing for the full 117,649 ways. The other is the Bonus Add feature, which adds scatters to the reels but does not guarantee respins.

You can play Piggy Bank Megaways slot at Genting Casino. The site is home to a wonderful selection of slots, table games, and live casino games. Visit Genting Casino online to enjoy any of these games at the comfort of your own home while using any device. Piggy Bank Megaways uses the Megaways system to full effect. If you are a fan of this game system or enjoy slots with great features then this game is for you. The maximum possible win of 12,000 times your stake can be attractive to both beginner and long-time player.