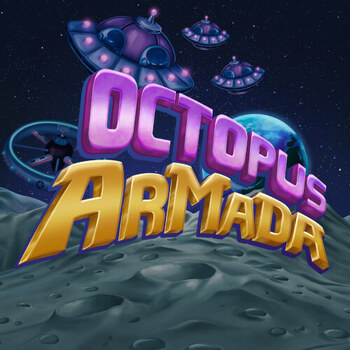 Are you ready to get tangled in an adventure with space octopuses? Hunt them on the reels to earn various rewards. Octopus Armada starts on a 5x3 reel with 15 pay lines. You can start placing your bets from a minimum of 0.30 up to a maximum of 30 per spin. It has a considerable Return to Player Rate of 95.78%.

As to symbols, Octopus Armada has ten regular pays and two types of wilds. On the lower half of the paytable can be found 9-A playing card tiles, worth 2.5-3.33x the bet for five of a kind, then higher value ray guns, circular spaceships, UFOs, rockets, and army men, worth 13.3x up to 50x the stake for a five of a kind hit.

The octopus wild symbol. It can substitute for any normal pay symbol, and when one hits, it makes one or two copies of itself. New wilds are added in positions that would make the best winning combination possible.

If a wild symbol makes a copy of itself, and it turns out to be a golden version, then the bonus round is triggered. In total, 8 free spins are awarded, which use a wild collection/symbol removal system. When a wild symbol hits, it is added to a meter located above the reels. Bearing in mind, only naturally landed wilds are collected, not the copies. Every time 4 wilds are added to the meter, the lowest low pay and the lowest high pay symbol on the reels are removed. Moreover, 4 free spins are also awarded whenever four wilds are collected, meaning a maximum of 16 extra free spins can be won.

Set your gaming budget and register to Octopus Armada on Genting Casino, playable on all mobile devices. Remember not to spend everything in one go, a little restraint on your budget would not hurt.