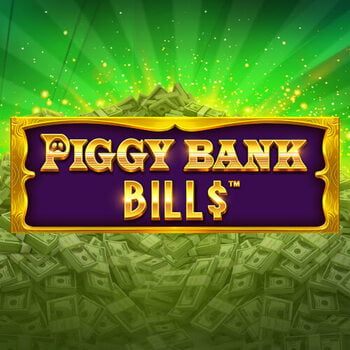 Produced by
Pragmatic
Piggy Bank Bills by Pragmatic Play is a game you probably are not used to. The game is different in its mechanics, but not to worry, it has plenty of cash and pigs if you love seeing those in these kinds of games. You win by matching two halves of similar banknotes to earn a coin. The game's major feature is when your chances of a raid in the bank is achieved when random multipliers overlay symbols.

The music is one of the most noticeable things in the game. The sound combination makes it look like it escaped from a BBQ or a Mariachi party on a Caribbean beach. The sound is very lively and gets you in the mood to begin matching the banknotes. The game has a good visual appeal, with most of the screen space occupied by the 9-paylines, 6 reel grid carrying all kinds of banknotes, wholes, and halves. Piles of cash lie around the reels, glowing with a gold and green light. This might be an attempt to give the dough a mysterious connotation.

It is possible to make the cash grab on any device, which allows for betting from 20pc to $/€100 for each spin. Piggy Bank Bills has high volatility rated 5 out of 5.

The game's features are very straightforward. You'll come across free spins and three minor piggy based features, which are:

While a free spin is on, random 2x or 3x multipliers will likely appear over the symbols. The multiplier on top of a winning bill is applied to the prize value if one is formed. If a winning bill has two multipliers, they multiply each other. Also, the lowest paying symbol left on the reels would be removed when there is a random spin during bonus rounds.