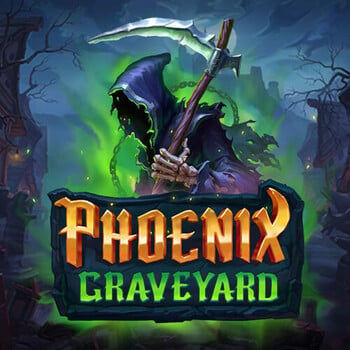 As vile as they come, the corrupt mayor and his wife grip Phoenix Town with an iron fist. A powerful claim with the feared Grim Reaper at their disposal haunts whoever goes against their rule. Only the power of the Phoenix Wild will vanquish the evils of this town and reward the most daring player with a chance for burning wins. Provider ELK Studios brings you one of the best slot games in the market with a very compelling storyline intertwined with its core gameplay. Phoenix Town is an experience waiting for the prospective players to take on the slot game. A dynamic-reeled atmospheric game, Phoenix Graveyard will surely give the best entertainment you would expect from a game with a thrilling aspect of a slot game.

Bound with darker or gothic themes of a medieval town with wooden houses, wilting trees, a gargoyle-like stone sculpture, and a foreboding image of the Grim Reaper. Phoenix Graveyard is set on a 5-reel 3-row slicing slot packed with win ways, walking wilds, jumping wilds, wild multipliers, and a bonus game mode. Accompanied by 243 theoretical ways to win with slicing symbols, the game has an RTP of 95% with a characteristic of high volatility. Features include the Tombstones where tomb frames randomly appear with any position displayed in a number of ways. Tombstones added to a random position activate Sudden Death, wherein the reels stop spinning and the symbols that land on the tombstone will be split in line with the number of ways. Two types of wild symbols are in the game, the coveted Phoenix Wild and the Grim Reaper wild.

These two trigger a battle feature after adjacent placements of both where the winner's multiplier doubles or an additional Phoenix Wild will be reborn. Play Phoenix Graveyard and other slot games here at Genting Casino!