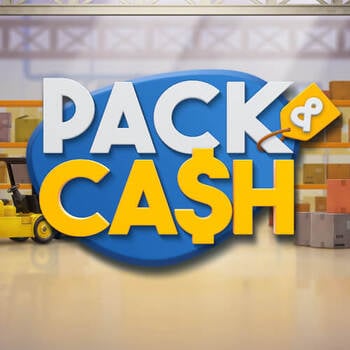 We exist in a world where everything comes in packages. This game shifts our focus from what’s in the package into how they were packaged in the first place. Set in the middle of a literal warehouse, Pack and Cash shows the inner workings of a delivery hub filled with shelves, boxes, and other packaging equipment.

The game is set on a 5x4 video slot with 1024 pathways to win.  There are symbols ranging from nine to ace card royals to packaged rubber ducks, footballs, trophies, and sweet boxes in the shape of hearts. There’s also a Wild symbol represented by a suitcase with a W on it, this can substitute for any other symbol in the game except scatters.

A symbol cascade feature is used to drop 20 symbols into the grid with the hopes of landing three or more identical symbols starting from the leftmost reel. Then, the winning combinations are removed and new symbols take their place. This keeps going as long as you keep landing new wins. There’s also a win multiplier that increases by 1 each time winning symbols are removed from the reels, this resets before every paid spin begins.

Express Package mystery symbols can also appear randomly on either paid or free initial spins. They transform into the same matching random symbol, which could be anything but a scatter. You can trigger the Special Delivery feature on any non-winning spin. With this, 1 or 2 modifiers are activated and can be played up to 3 times on a spin, such as: a wild symbol will appear at random anywhere on the first three reels, or a Symbols Remover will remove random pay symbols from the grid (without affecting the multiplier).

There’s also a Free Spins feature triggered by at least 3 Scatters. The number of initial Free spins depend on the location of the Scatter symbol.

There are many ways to bag a win and there are many features that you can explore. With Pack and Cash, follow the delivery flow to claim a treasure-filled package of your own, remember to choose wisely! Play this game on any mobile device with Genting Casino.