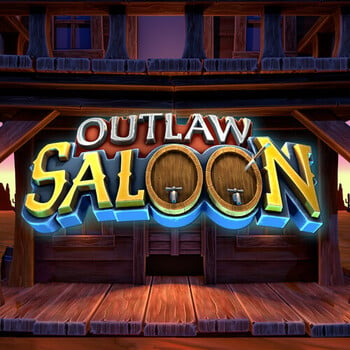 Produced by
MicroGaming
Outlaw Saloon slot is a risky slot machine by Gold Coin Studios that features 20 betlines and 5x3 reels. In the base game, you can receive Gold Bar Respins, which can result in payouts of up to 5,000 times your wager. Additionally, players can select from three different bonus rounds, and the top prize is 10,000 times their initial investment. Outlaw Saloon game has a return to players rate of 94 percent. Play Outlaw Saloon for as little as 0.20 and all the way up to 25 per spin.

Video slots like the Deadly 5 slot tend to live up to the reputation of the Wild West, which is given that nickname for a reason. This time, Gold Coin Studios' Outlaw Saloon slot game is the newest entry in the genre. With Metered Prizes, a bonus spins round, and Sheriff Badges that might award up to 10,000x the wager, the gameplay and ambiance are joyous.

The base game in The Outlaw Saloon slot online is particularly straightforward. Five reels and three rows make up the layout, which has become typical for video slots. Additionally, there are 20 active paylines, and in order for a payout to be made, there must be at least three matching symbols on consecutive reels.

Sharp, nearly 3D graphics used in The Outlaw Saloon online slot enhance the immersiveness of the whole experience. The characters have simple, but visually appealing, designs. The backdrop for the reels features a Western town and a sunset.

The low-value category of symbols consists of the four gilded card suits. The game's logo, three character symbols, a money bag, poker chips, and other high-paying symbols are displayed after them. The highest-paying one pays out 100 times the wager for a payline that is fully covered.

The game's sheriff badge scatter and wild symbols are the game's final two symbols; we'll talk more about them later.

The return to players rate cap for The Outlaw Saloon is 95.98 percent or almost average for the sector. Furthermore, players will discover while playing, the excessive volatility can produce rare but extremely substantial prizes.

When playing the Outlaw Saloon, a few bonus elements make the game more exciting and spiced up my gaming.

When playing the Outlaw Saloon slot machine, a few bonus elements make the game more exciting and spiced up my gaming.

Outlaw Saloon has an amazing set of bonus features. The Gold Bar Wilds are available, and they can also show up on the three middle reels. The gold bars award one respin with the gold bar or badge sticky, revealing either another gold bar, a badge wild, or a regular wild. Prizes from the gold bars might be up to 5,000 times your initial wager.

Sheriff's badges, which are wild as previously noted, also show up on the three middle reels. A gold bar, wild animal, or badge is revealed once they lock in place for a respin. For the bonus round to be won, 8 badges must be accumulated during the same respin feature. In the respins round, you are awarded one more bonus spin for each revealed badge, and you can select one of three options:

The three characters that make up the premium symbols as well as the game's logo pay between 25 and 100 times your wager for five-of-a-kind wins. Wilds appear on reels 2, 3, and 4, and they substitute for pay symbols to help you complete winning combinations. Additionally, a number of additional feature symbols act as wilds.

Outlaw Saloon is a fantastic game. All that remains is a sticky wild respins feature with the potential to award gold bars or initiate the bonus game. You have three options in the bonus round, and the multiplier option is a good touch. The 10,000x potential is respectable and obviously worthwhile. Play Outlaw Saloon and win big.