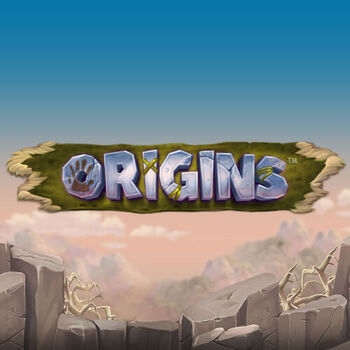 Produced by
StakeLogic
Origins game is a risky, prehistoric slot machine from StakeLogic that features 10 paylines and 5x3 reels. The multiplier upgrade trail bonus round has a cash collect system, while the Super Hold feature has double and triple symbols. You can win up to 10,000 times what you bet, when you play Origins. Origins online has a return to players rate of 96.01 percent. The game can be played for as little as 0.20 and all the way up to 20 per spin. Play Origins and know more.

Five reels and 3 rows make up the grid on which The Origins online slot is played. Ten paylines, which might be expanded during the Super Hold Feature, are present. The lowest and maximum bet sizes are 0.20 and 20, respectively. You might win up to 10,000 times your initial investment.

Starting from the leftmost reel, you must link at least three matching symbols across a payline to win.

Both a Super Hold feature and a bonus spins feature are included in The Origins. Both of these have distinctive triggers and mechanics.

When you open the Origins slot machine for the first time, the cartoon graphics immediately stand out. There isn't much animation, and the grid is set between two carved stone pillars. However, this contributes to a polished appearance.

The music is rhythmic with occasional chanting, and the symbols have the appearance of cartoon characters.

The prehistoric family, who serve as the story's central characters, are the high-paying symbols. They pay up to a maximum of between 5x and 50x the investment and are the son, mother, father, and grandfather. The grandfather is the most valuable icon.

There are three bonus symbols; the first is the Wild, which can be used to create winning combos in place of any pay sign. Then comes the scatter symbol, which portrays a T-Rex drinking from a coconut and initiates the bonus spins Feature.

Additionally, during bonus spins, the Collector Symbol appears. A Wooly Mammoth serves as the Super Hold Symbol as well. To activate the Hold and Win feature, a stack of three symbols must appear on a reel.

The Super Stake ante bet boosts your chances of winning a bonus round and a super hold, but it also costs twice as much per spin if you activate it. Only reels 2 to 5 can contain Wild symbols, which pay 5 to 50 times your wager for combinations of the premium symbols. Wilds are substituted for pay symbols to complete winning combinations; they have no intrinsic worth.

To enter the Bonus Round, which awards 10, 15, or 20 bonus spins, you must have 3, 4, or 5 scatters visible. A pay symbol is first selected at random, and as the feature progresses, the chosen symbol will land with a monetary prize associated with it. They continue to act as ordinary pay symbols, and if a Collector sign appears at the same time, the cash rewards are won.

After 4 collectors have been collected, you receive +10 additional spins and an x2 multiplier. The Collector symbol is itself collected in the metre/trail above the grid.

Another excellent slot has been created by Stakelogic. The Origins has a fluid gameplay experience and simple game mechanics. The extra features are enjoyable and intriguing. Along with the outstanding presentation, all of this is certain to appeal to big rollers as well as newbies. Play Origins and win big.