Play Of Sabers and Monsters 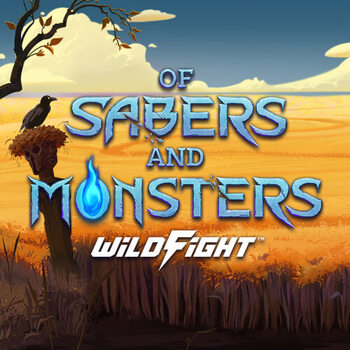 About Of Sabers and Monsters

There are 4,096 paylines on the six reels, four row, and Of Sabers and Monsters slot game. Wins are created by matching three or more symbols across the reels, starting from the leftmost reel and moving right.

With stakes ranging from 0.20 to 50 each spin, all bankrolls may be accommodated. To change your wager, click where it reads "Cash Bet" beneath the reels. You can pick from 17 predefined bet values.

With an RTP of 96 percent, Of Sabers and Monsters slot online is right in line with other online slots.

The top prize is 18,350 times your bet. The Tempest Free Spins feature will give you the best opportunity of winning the grand prize.

In this fantasy-themed slot, heroes go up against monsters. When the Free Spins feature is triggered, the background of the reels, which is typically a field with a temple in it, changes to a spooky-looking forest. Players will appreciate how the symbols respond when a feature is triggered or a winner is generated, despite the artwork appearing to be rather simplistic.

The music has a very ominous and tense soundtrack. It becomes more intense when the Free Spins function is used, but overall, the music is engaging and quite normal.

The lower-paying symbols on the reels are represented by the card suits of clubs, diamonds, hearts, and spades. The four heroes, Helena, Kyrylo, Oxana, and Maxim, receive better remuneration. Maxim is the most lucrative symbol, earning 0.35, 0.5, or 1.5 times stake for combinations of 3, 4, or 5.

In the Of Sabers and Monsters, the game's Wild can replace any regular symbol. It may also be Sticky, meaning it will remain during the full Free Spins bonus round.

Of Sabers and Monsters Features

Of Sabers and Monsters online slot has amazing bonus features that will keep you afloat. A character's Focus Meter gains Focus Points whenever you win using that character's symbol. Each Focus Meter for one of the heroes starts out half full and requires 100 points to fill. Each character receives the Ardent Respins feature upon reaching a full metre.

In the Ardent Respins feature, character symbols will face off against monsters, but only on the four centre reels. If the hero wins the conflict, he becomes a sticky wild, and the conflict is always won by the symbol with a full focus metre.

When any of the four centre reels are completely covered in premium symbols, the Skirmish feature is activated.

Reel 6 occasionally lands a feather symbol, which triggers a random payout between 4 and 200 times your standard game wager. Additionally, there are 8 to 20 free spins or 8 Tempest free spins up for grabs.

When three, four, five, or six scatters appear, the bonus round is activated, awarding you eight, twelve, or twenty free spins, respectively. Although you can risk losing the entire feature, you can wager for more spins—up to 20 at most—but this is optional.

Only the Feather symbol has the ability to initiate the Tempest Bonus Round, which awards 8 Tempest Free Spins. For the length of this bonus, all characters are in Ardent Mode, which means they always prevail in combat and become sticky wilds on the four middle reels.

Of Sabers and Monsters at Genting Casino

The video game Of Sabers and Monsters slot machine is intriguing. This slot stands out from the competition due to the abundance of extra features that will keep you entertained. Others might only offer a simple Free Spins function, for instance. Additionally, the maximum win possibility is considerable at 18,350 times your bet. This game is unquestionably worthwhile. Play Of Sabers and Monsters slot and win.