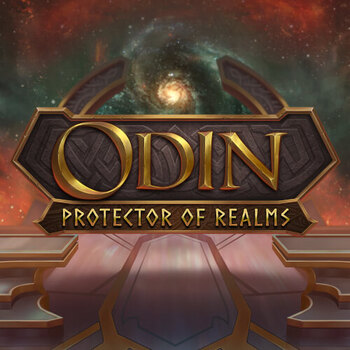 Another spinoff for the Norse myth genre arrives. Play 'n GO introduces a slot game this time taking a focus on one of the most prominent gods from Northern Europe and the one that sits on top of the Norse pantheon. The Allfather Odin brings down judgment and shows you jackpot wins. In Odin: Protector of Realms, Play 'n GO uses the same gameplay and mechanic from a past title named Honey Rush. The math model, on the other hand, has been tinkered with added modifiers to spice up the game. The studio is a veteran in mythology-based slot games but still brings a fresh and interactive visual.

Odin: Protector of Realms is showcased in a hexagonal-shaped grid. Said grid is enclosed in a platform reminiscent of Valhalla with two stone guards on each side. The background shines with an image of the galaxy. Odin can also be seen standing on the side with grace waiting to jump into action. Laid out in a 4-5-6-7-6-5-4 configuration with 37 symbols dropping on each new spin. Connect 5 or more matching symbols to form a winning cluster and coin payout. Volatility is set at a medium with the RTP at a 96.2% value.

Paytable values can go up to 250 to 5,000 times the bet if a full 37 symbol cluster is hit. Right after a golden blade replaces the wild and lands anywhere to substitute all paying symbols. The formula of hitting consecutive wins via a cascading feature to trigger Forged Ring features is intact. Odin enters the fray with three modifiers from his powers namely Wisdom which upgrades the central symbol, Power which destroys 2 random symbol types on the grid, and Glory which gives 2 to 8 random wilds on the grid. Play Odin: Protector of Realms!