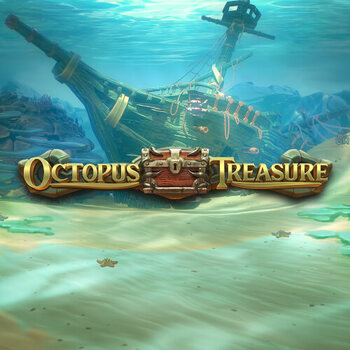 The Octopus Treasure slot machine is an under-the-sea themed slot game from developer Play’n Go. This slot has a standard 5x3 video slot format and an impressive top prize of 5,000x your stake, perfectly mimicking the treasures of the deep. There’s lots of features on offer in the Octopus Treasure slot machine too such as key-respins, treasure spins, and four different modifier features. It’s safe to say that Play’n Go have made sure that you’re going to want to dive into this one.

In terms of symbols used, the Octopus Treasure has a variety of symbols inspired by the treasure that can be found at the bottom of the ocean. Here’s a run down of what to look out for:

This is a randomly triggered feature which can award players with one of four features whenever a key symbol lands on the reels and unlocks a treasure chest symbol. The four features on offer are as follows:

Landing three key scatters in any reel position within a single spin will activate the key-respins feature. During this feature only keys will appear on the reels. The keys don’t have any monetary value but will dictate how many treasure spins the player will be awarded. Players can earn 5-10 treasure spins from this feature.

Treasure spins activate when the key respins feature ends. Each spin will include one of the four bonus features listed above and any more keys that are landed will result in an extra free spin being awarded. There’s no limit to how many spins players can win from this feature. Once spin is clicked the reels will spin and stop randomly. Players can fast track this process by clicking the ‘stop’ button or enable ‘fast play’ mode. Winning combinations are made when three or more matching symbols are landed across a payline read from the left to the right.

What is the maximum bet for Octopus Treasure?

The maximum wager for the Octopus Treasure slot machine sits at £100 per spin.

What is the minimum bet for Octopus Treasure?

The lowest possible wager for the Octopus Treasure slot online is 20p per spin.

Can I play Octopus Treasure on mobile?

The Octopus Treasure online slot is fully optimized for use on all devices including mobile phones and tablets.

What is the RTP of Octopus Treasure?

The Octopus Treasure game has a theoretical return to player (RTP) of 96.25%

What is the biggest potential win for Octopus Treasure?

The Octopus Treasure slot game has a maximum payout of 5000x stake.

About the Game Provider: Play’n Go

Since its founding in Sweden in 1997, the company has released hundreds of online slots in a variety of genres and themes. The portfolio includes games about secret agents and superheroes, gemstones and graffiti artists, forgotten civilisations and ancient deities, and much more. Play'nGO is a major provider of custom, all-encompassing solutions for the online gaming industry. Play n'GO has produced goods like as their original independent platform, a variety of high-quality casino games, and mobile and tablet gaming solutions using cutting-edge technology. The executives and staff at Play n'GO have extensive industry experience, and their products are known for their quality, adaptability, and dependability. Play n'GO are well known for the great mobile compatibility of their games which include titles such as Merlin and the Ice Queen Morgana, Rise of Merlin, and Temple of Wealth.

At Genting Casino you can play Octopus Treasure plus a whole host of other table games and live casino games that are sure to thrill and excite you. Play today.