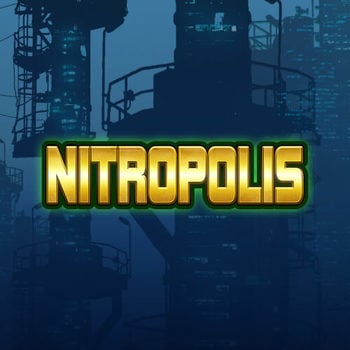 In this world of adorable critters somewhere in a dystopian future, four clans fight it out for green Nitro to fuel their cars. Fire up the game in 6 reels with 4 to 12 rows, playable on any device. Bets range from 20 to 100 per spin. Players can also activate one the betting strategies namely, Optimiser, Leveller, Booster or Jumper. There are up to an astounding 85,155,840 ways to win!

Twelve regular symbols make up the paytable, divided into low, medium, and high pays. Winning combinations are from three to six symbols, in any row from the first reel onwards. With so many win ways possible, the values of single combinations are lower than usual. Six mid pays are worth 0.24x to 0.36x, while six high pays award 0.6x to 1x the stake. The mushroom cloud is the wild, substituting for anything except the bonus symbol.  During free spins, the wild also substitutes for the scatter symbol in a scatter win. Respins trigger after every win in the base or bonus game. All symbols involved in the winning combination spin again, potentially leading to new combinations. Nitro Reels may appear in any reel covering two positions and may contain 4, 6, 8, 10, or 12 symbols. It can randomly upgrade win ways in between Respin and Free Spins. There is also a chance that it will randomly spin again when there are no additional wins. The Bonus game is triggered when 3 to 6 scatter symbols land in view during the base game awarding 10, 15, 20, or 25 spins respectively. Three or more bonus symbols in the feature retrigger the same number of spins. Before the bonus game, one symbol is randomly chosen to be the scatter paying symbol. Three or more scatter paying symbols on three or more different reels triggers a win.  Nitro Reels are sticky and remain locked in place for the full duration.

Play it out with these lovable pugs by registering to Nitropolis on Genting Casino. Remember to set your spending limits and stick to them.