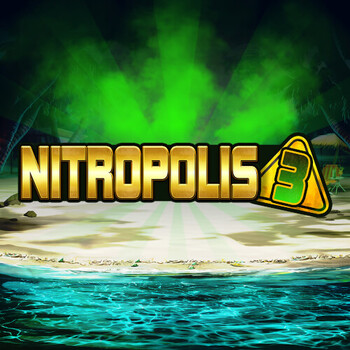 Produced by
Elk Studios
The Nitropolis 3 game is played on a 6 reel by 4 row slot game layout that gives players up to 4,096 ways to win. This dystopian urban-themed slot game comes with exciting features such as expanding rows, big symbols, Nitro reels, a bonus, and Super Bonus game! Playable from 0.20 to 50, the Nitropolis 3 slot game has a return to player percentage of 95.0% and is said to be highly volatile. You can a maximum of up to 50,000x your bet. Land wins by getting 3 to 6 matching symbols on adjacent reels.

Fans of ELK Studios’ Nitropolis series are sure to be familiar with the dystopian urban environment the game is set in. In this post-nuclear world, four animal clans try to get their pays on Nitro fuel for their vehicles, but Sergeant Nitro Wolf has kicked the clans out of town finding themselves on a tropical beach.

This removes winning symbols from the reels and fills the resulting gaps with new symbols and also adds an additional row. If there are consecutive wins, the avalanche continues. Max number of rows is 8.

There are a number of special symbols that can appear and each has a different effect. Redrop symbols give a redrop wherein all current bonus symbols and Nitro reels remain. Both Ways symbols activate winnings from right to left. Green Nitro Feature symbols have effects that affect Nitro Reels on the same or on adjacent reels.

Getting 3, 4, 5, or 6, Zeppelin Scatters award you with 8, 12, 16, or 20 free spins respectively. All Nitro reels are sticky in the bonus game. Safety level increases one row for every winning spin for up to 8 rows high. Get at least one Super Bonus Symbol to trigger the Super Bonus Game which is played with 8 rows and Both Ways activated.

This feature of the Nitropolis 3 slot machine allows players to jump straight into the game’s action with 5 different game modes. The bet ranges from 2x the bet with double the chance to trigger the Bonus Game and up to 500x the bet for Super Bonus with 8 rows and Both Ways activated.

Fuel up your vehicles and join the four main animal characters in the Nitropolis 3 slot online on their quest to get some Nitro fuel. Come on over to the Genting Casino website and play Nitropolis 3 slot for a chance to get up to 50,000x your bet. Experience exciting features and special symbols as you play this dystopian urban-themed slot game. Find this and many more online slot games and casino games at the Genting Casino website!