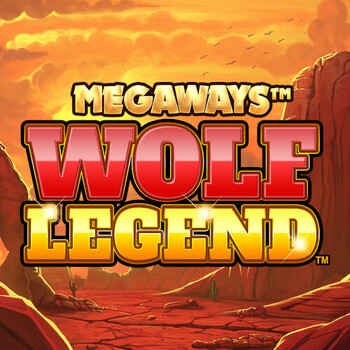 Produced by
Blue Print
Wolf Legend Megaways online slot is comparable to all other Megaways-style slots. It has 6 reels that vary in height from 2 to 7 symbols on each spin, allowing players up to 117,649 ways to win when completely expanded. The RTP for Wolf Legend Megaways 96.21% which is slightly above market average. The maximum possible win is 50,000x your stake. It is playable between 0.10 to 10. It is a high volatility slot which usually means stretches of non-winning spins and a chance at large value wins compared to lower volatility slots.

The background of Wolf Legend Megaways slot game is the North American wilderness, and symbols on the reels include A, K, Q, J, 10, and 9 royals. There are also American eagles, bisons, huge cats, and gold wolves. The latter is the most lucrative, paying out 1, 2, 10, 25, or 50 times your bet for 2, 3, 4, 5, or 6 symbols on adjacent reels.

It has the feel of the American wild west, set against a canyon backdrop and with a howling soundtrack. There is also a Wild wolf symbol that appears only above reels 2, 3, 4, and 5; it replaces for all symbols except the Scatter and pays according to the highest value gold wolf. There is also a frame mystery symbol that can appear anywhere on the reels, revealing the same randomly chosen symbol bar the Scatter for increased winning possibilities.

When you are moved to the Gamble feature, you can use your free spins to play the Free Spins feature or gamble to earn extra lives and Golden Streak respins - if you lose, you will be returned to the main game.

The Wolf Legend MegaWays game employs a Cascading Symbols feature, in which all winning symbols trigger a chain reaction that results in the winning symbols being removed from the reels. New symbols fall from above the reels, giving you the opportunity to win many times on each play.

Look for the howling wolf Scatter symbol, which can appear on any of the reels (but not above them) - 3, 4, or 5 of them will activate the Golden Streak bonus, which awards 1, 2, or 3 lives. The scatters are then retained in view as the reels spin again; if more Scatters emerge, they are also held in position. The respins continue until you run out of lives or fill the reels with Scatters.

What is the maximum bet for Wolf Legend Megaways?

The maximum bet for Wolf Legend Megaways is 10.

What is the minimum bet for Wolf Legend Megaways?

The minimum bet for Wolf Legend Megaways is 0.10.

Can I play Wolf Legend Megaways on mobile?

Yes, you can play Wolf Legend Megaways on any Android or iOS mobile device.

What is the RTP of Wolf Legend Megaways?

What is the biggest potential win for Wolf Legend Megaways?

The biggest possible win for Wolf Legend Megaways is 50,000 times your stake.

The Wolf Legend Megaways slot machine is available at Genting Casino. The site is home to a great variety of slots, table games, and live casino games. Visit Genting Casino online to enjoy these games wherever you are using any device. If you are a fan of the Megaways system or enjoy games with excellent graphics then this is for you. The game offers a 50,000 times your stake maximum possible win that can interest many players.