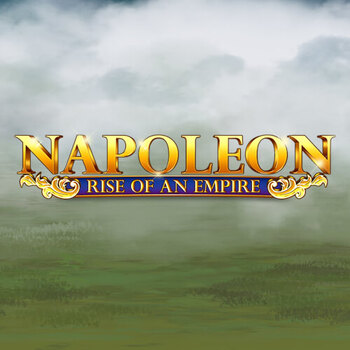 Produced by
Blue Print
In Napoleon: Rise of an Empire slot game, go to war with the great French general. It's a 5-reel, 20-payline slot featuring wilds that can multiply winnings by up to 16x, a Free Games feature that awards up to 20 free spins with streak spins and wild multipliers, and a payoff of up to 5,000 times your stake per payline, all created by Blueprint Gaming! Play from .20 to 40 each spin on any gadget.

Napoleon: Rise of an Empire slot online is fantastic, not just because of its interesting historical background, but also because of its excellent additional features. Blueprint Gaming designed Napoleon: Rise of an Empire slot machine and offers a 5-reel, 20-payline player interface. Start your bets from .20 to 40 each spin. The RTP on this slot is 95.96 percent and a payoff of up to 5,000 times your stake per payline, with a Medium level of variance. Wild, FreeSpins, Multipliers, Scatter symbols, Random Wilds / Additional Wilds, and Respin Locking Win are the main game elements. Slot gamers will find themselves in the heart of a bleak battleground, with thick smoke billowing around. Players may notice Bonaparte, who is riding a horse and leading his army forward, in the distance. The reels are framed in a golden frame and are practically translucent, allowing the floating smoke to be visible. The low-payers of the game are represented by card values 9 through A, so there aren't many surprises there. Middle-value symbols will include galleons, horses, and cannons. The galleon is the most valuable of all the symbols since it pays out 1,600 coins when five of them are aligned. The cavalryman is the most rewarding of the conventional symbols, with five of them awarding 4,000 credits.

Napoleon slots have five reels and during play, Napoleon himself can appear at the top of the wheels, calling for an attack! This either showers scatter symbols across the reels, helping you unlock the free spins feature, or adds extra wild symbols to help you on your way to a jackpot win.

The free spins bonus has a unique feature called The Napoleon Streak, which locks extra winning symbols in place until you run out of winning combinations, so when you play Napoleon slots you are never far from a big win.

Aside from these bonus features the big attraction that draws you back to log into Napoleon slots online again is quite simply the prizes on offer. This is a game where players can win big! The two premium symbols are the ship and the soldier which pay eighty and two hundred times your stake. The lower value symbols the 9 and 10 cards pay a minimum of four times your stake for a full line.

Put simply, this game is packed with multiple ways to win large payouts, and that's where its focus is. You can login on desktop, mobile, or tablet devices so wherever you are command your front line in your conquest of Europe, Napoleon is here!

How to Play Napoleon Slot Online

There are 20 paylines in Blueprint Gaming's Napoleon: Rise of an Empire game. This game allows players to gamble anywhere between 0.20 and 40 coins every spin, making it suited for a wide range of gamers. To begin the game, press 'SPIN.' The reels will spin and come to a random stop. You win if a combination of symbols on the reels makes a line of 2, 3, 4, or 5 matching symbols on one of the win lines. Your winning lines will be highlighted, and your earnings will be added to your account balance. A prize will be awarded if you land three or more matching symbols on any of the 20 paylines. The top payoff is 5000x your stake, which is paid out by the wild symbol.

Napoleon is a wild symbol that substitutes for all other symbols except bonus symbols. In addition, Wild has an additional multiplier for winning. One sign activates the x2 multiplier, while two and three symbols activate the x4 and x8 multipliers, respectively. Four wild symbols, on the other hand, provide an x16 multiplier. Napoleon initiates the Respin Locking Win function in any spin. Napoleon can add bonus symbols to the reels to boost the chances of bonus activation, or he can randomly add wild symbols to the playing area. If you get three Golden Order icons, you'll get ten free spins. Another Napoleon Streak feature is available as an option. The symbols that made up the payment combination will remain in their seats if you win. The slot will re-spin once. You'll get a new spin if the symbol combination is reinforced by additional photos.

What is the maximum bet for Napoleon Slot?

The maximum bet for Napoleon Slot is 40.

What is the minimum bet for Napoleon Slot?

The minimum bet for Napoleon Slot 0.20.

Can I play Napoleon Slot on mobile?

Yes, you can play Napoleon Slot on almost any mobile device. It is HTML5 compatible.

What is the RTP of Napoleon Slot?

The RTP for Napoleon Slot 95.96 percent.

What is the biggest potential win for Napoleon Slot?

The biggest potential win for Napoleon Slot is 10000 times your bet.

Since 2008, Blueprint Gaming, a game production firm located in the United Kingdom with headquarters in Newark and Malta, has been a subsidiary of the Gauselmann Group in Germany. Gauselmann is a family-oriented entertainment company whose objective is to deliver engaging games with tiny prizes for small investments. Blueprint, as part of this group, creates and distributes its own original online slot games as well as games for other companies. Blueprint Gaming's diverse portfolio guarantees that the company has a broad appeal that appeals to all types of slot fans. All types of gamers can play the games they desire while remaining confident in the fact that production quality, fairness, and entertainment value will always be assured. Blueprint Technologies Ltd is licensed by the Malta Gaming Authority and popular slot titles created by this developer include Wish Upon A Leprechaun, Rolling in Gold, and Dr Wilde and the Tomb of Dead.

One of the various games offered at Genting Casino is the Napoleon online slot machine. On the site, which features an easy-to-use interface, you may choose from a variety of table games and live casino games. From simple classics to video slots with a variety of bonuses and features, there's something for everyone. You may play Napoleon slots on your smartphone or PC from the comfort of your own home. For a fantastic gaming experience, go to the Genting Casino website.