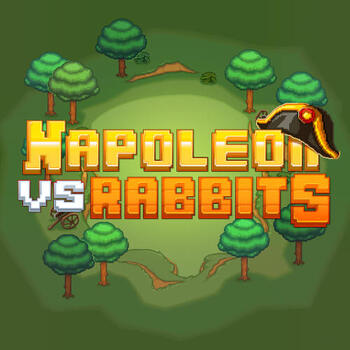 Produced by
Relax
The latest casino game from Blue Guru Games is called Napoleon vs Rabbits. Napoleon vs. Rabbits game is a grid slot with cluster payouts that is played on a panel with 7 rows and reels. A win is produced when at least five identical pay symbols appear next to each other in a vertical or horizontal direction during a single spin of the reels. The game has a return to players rate of 94 percent and high volatility. Play Napoleon vs rabbits and know more.

About Napoleon VS Rabbits

Blue Guru Games' video slot Napoleon vs. Rabbits online has seven rows and seven reels. The cluster pays mechanic is in play, where a win is produced when five or more of the same sort of symbol appear in a cluster. You have the option of placing a minimum stake of 0.10 or a maximum bet of 100. The game has three distinct RTPs built in, with a default RTP of 95.45%. However, game operators can also select to use one of the lower RTPs of 94% or 90%. Napoleon vs. Rabbit's online slot has a 40% hit rate, considerable volatility, and a 3894X maximum win potential. The typical win while starting the bonus game is 39.71X the stake.

We have a few fantastic features to aid us in our pursuit of the bigger victories within this funny conflict between Napoleon and an enormous number of bunnies. The features include Free Games, Bonus Buy, Mystery Rabbit Box, Rabbit Run, Wild Symbol, and Wild Symbol.

Landing five or more of the same kind of symbols in a cluster with adjacent or vertical places results in a winning combination. The cascade feature, which removes the winning symbols from the reels and then drops new ones to fill the empty spaces, is activated when a win is made. As long as there are new victories, this will continue.

Green, orange, red, and purple carrots are the lower paying symbols in Napoleon vs Rabbits slot machine. The sword, the medal, and the hat are the higher paying icons. The game's mystery sign is the rabbit, and you can also come across a mystery box. The Napoleon wild in the game is Napoleon himself, as opposed to the game's standard wild emblem, a shield with a golden W.

The wild symbol in the game can replace all other symbols with the exception of the mystery and mystery box symbols, which serves to increase the number of winning combinations.

A rabbit will appear on the side of the reels if you form a winning cluster with a Napoleon wild in it. When no more cascades can be produced, the born rabbits will flee in the direction of the Napoleon wild and change regular symbols into mystery symbols en route. The lock on the mystery boxes will be released if the rabbit steps on them.

The same random symbol type will be used for the symbols that have changed into mystery rabbit symbols.

Napoleon VS Rabbits at Genting Casino

The gameplay of Napoleon vs Rabbits are really simple to understand, and the design is attractive. Many times, the cascading features cause a spin to last a long time, and during these, you can gather a ton of bunnies along the sides of the reels. Then, these will produce mystery symbols and open any mystery boxes they pass. The bonus game starts when you open three or more mystery boxes at once. The original game's characteristics are present in the bonus game as well. Play Napoleon vs Rabbits and win.