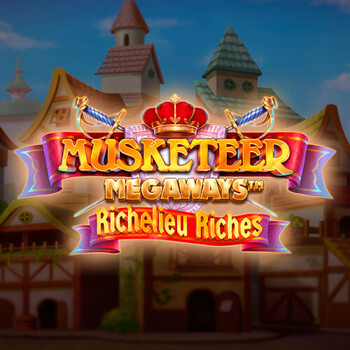 Step into the world of the Three Musketeers, Musketeer Megaways brings the four adventures to the reels and the action starts at 6 reels, holding up to 7 symbols each. The stake ranges from 0.20 up to 20. It has an average Return to Player Rate of 95.517%. The symbols Richelieu, D'Artagnan, Porthos, Athos, or Aramis reward 50x the standard bet for 6 of a kind. Hats, coin bags, and scrolls rewards 2-10x for 6 of a kind. 9-A royals rewards 0.7-1.5x for 6-symbol winning ways. The wild symbol, landing on reels 2, 3, 4, or 5 to substitute any regular symbol.

The cascading wins feature removes winning symbols from the reels and replaces them with new symbols.

1ForAll Game Mode comes with a couple of random modifiers not available in All4One mode. The Lose to Win modifier guarantees a feature or at least a win, and the Max Megaways modifier maxes out the grid with 7 rows per reel and 117,649 win ways.

Landing 4 bonus symbols triggers 5 free spins.+1 up to 7 free spins for each extra bonus symbol in vie. Four separate game grids are used during 1ForAll free spins, with separate multipliers. These multipliers start on x1 and rise by +1 after winning cascades.

All4One Game Mode is played on four reel sets in the base game, land 4 bonus symbols on the same game grid to trigger 5 free spins. Additional bonus symbols add 1 free spin up to 7. The rules of free spins are the same, except now, when a special All4One symbol lands in all four reel sets, all multipliers take the value of the highest multiplier.

If you end either bonus round with less than a 10x win, you get 3 extra free spins to play This can be triggered once.

Register to Musketeer Megaways on Genting Casino. Playable on all mobile devices. Enjoying the game is awesome, but always be mindful of your bets and only go with what you're comfortable with.