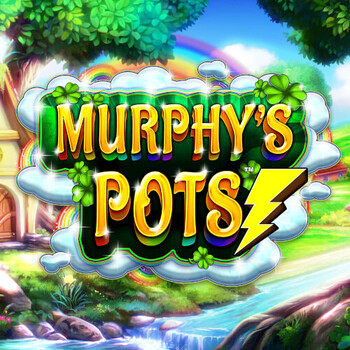 Celebrate St. Patrick's Day as you stumble upon the magical world of Murphy's Pot. Boasting a combination of features that would keep you on your toes with excitement. Murphy’s Pot is played on the usual 5 x 3 reels with 25 fixed pay lines.

The Leprechaun is the Wild Symbol of Murphy’s Pot and is quite handy when you land them in part with a combination to get a bigger reward. Note that the Wild Symbol can not substitute for other symbols that trigger features. The Pot of Gold is one of those symbols, which is also the Scatter Symbol of the game, land 3 or more of the Scatter Symbol in view and you will instantly get 500 times the stake along with 10 or more Free Spins depending on how many you land. All winning combinations made during the Free Spin will have a 2x multiplier while also retriggering Free Spins if you land any more Scatter Symbols. There is a Rainbow Feature in which you need 5 Rainbow Cloud Symbols in order to trigger it. While in this Feature you are presented with 7 clouds each hiding a prize or a multiplier that goes to the pot then, Murphy the Leprechaun will stand on top of a rainbow and he will give you 7 spins. The Goal is to land a Sun Symbol to bring Murphy closer to the pot of gold, landing the Thunderstorm Symbol will drive him further. Activating the Rainbow Feature on a Normal Spin grants you a 5x multiplier, however activate it on a Free Spin and you will get a 30x multiplier instead.

Four leaf clovers, Leprechauns and a beautiful maiden awaits you here on MC's Murphy's Pot. See if the Luck of the Irish favors you here in Murphy's Pot with minimum bets starting at 0.25 with a maximum of 16. The RTP of Murphy’s pot is a considerable 95%. Search for that magical pot of gold in Murphy’s pot here in Genting Casino available on all mobile devices.