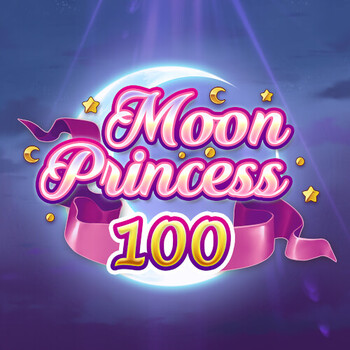 Produced by
Play N Go
A trio of females can be found as symbols on a 5 by 5 game grid as well as floating perilously on the side of the screen of Moon Princess 100 online slot. This is significant because when certain features are triggered, players are rewarded the power of whichever princess is currently displayed in view. Volatility is high, which means that there may be streaks of non-winning spins, but massive wins are also possible. The RTP for Moon Princess 100 Slot Online is 96.2 percent, which is higher than normal. The largest possible for payout when you play Moon Princess 100 Slot is 15,000 times your stake.

The minimum bet 0.20 and the maximum bet for Moon Princess 100 is 100. Because Moon Princess 100 Slot Machine is a cluster pay slot, players must land three or more identical adjacent symbols horizontally or vertically to win. The paytable has three characters named Love, Star, and Storm who appear on premium symbols to generate payouts of 10x the bet for five of a kind or 5x the stake for mixed princess combinations. Following that are four princess-themed icons that pay 2-3x the bet for a five-symbol line. Before we get to the reveal, there's one more symbol to mention: the moon wild, which may be substituted for any other symbol and pays 50x your wager for five of a type.

A Girl Power feature may be triggered at random on any non-winning spin. It will be one of the following princesses, depending on which princess is displayed next to the grid:

A power metre is located next to the grid. Landing winning combinations of three, four, or five princess symbols fill one, two, or three sectors of the metre. When three sections are completed, players are awarded one free spin known as the Princess Trinity. The win multiplier is reset for this spin, and each princess uses her modifier on non-winning spins until all three have been expended. Free spins are granted if the grid is cleared during this bonus.

When activated, players can select one of three free spins options: Love, Star, or Storm, each offering four, five, or eight free spins. The chosen princess performs her feature talent on every non-winning spin. In addition, everytime the Power Meter fills up in the bonus game, it provides 4, 3, or 2 more spins while playing the Love, Star, or Storm feature. This time, instead of the customary 20, players can earn up to 100 free spins.