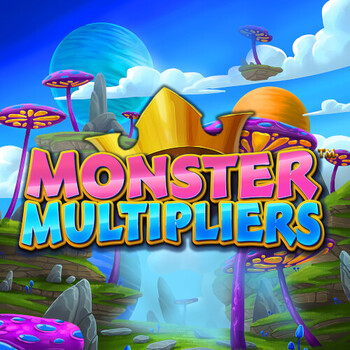 Produced by
Playtech
Find fantastical treasures up to 10,000 times your wager when you play Ash Gaming's Monsters Multiplier game. Win incredible rewards by starting the free spins, where a random multiplier can multiply your winnings up to 100 times. The landscapes in this vibrant universe defy gravity, resulting in islands that float in the air, enormous mushrooms, and—most importantly—small colored balls that disperse in the atmosphere. Monster Multipliers slot game has a return to players rate of 95.7 percent and high volatility. Play Monster Multipliers for as 0.20 and all the way up to 500 per spin.

Ash Gaming, a Playtech partner studio, attempts grid slots for the first time with the hotly contested Monster Multipliers slot online. The game transports players to the world of enormous mystical monsters, which can offer jackpots of up to 10,000 times the initial wager.

Monster Multipliers online slot appears to be a lovely and endearing game at first glance. However, Monster Multipliers' feature design was influenced by another venerable slot, Sweet Bonanza. It has the same enormous 6x5 grid with 8+ matched symbols paying anywhere and the exact same gameplay as the Pragmatic Play title. The majority of wins in the slot come from random multipliers that happen during the free games.

Going over to the math model, we can see that the Monster Multipliers is lacking in that area. Its numbers are significantly inferior to Sweet Bonanza's, it gives a lesser return rate, and it only has half the maximum win potential. Having said that, the return to player percentage of Monster Multipliers is 95.7 percent, which is a little below average. The highest payout is set at 10,000 times the original wager due to the excessive volatility. In order to participate, gamers must select wagers ranging from 0.02 to 500 every spin, which should be appealing to everyone.

The bizarre monsters on the reels come in a variety of sizes, hues, and shapes. You can easily recognize the highs and lows of the nine typical symbols by their sizes. You must land at least eight matching symbols anywhere on the grid to be awarded a payment; they do not necessarily need to appear adjacent to one another on the reels. The higher symbols pay from 10x to 50x the stake when combinations of 12 or more of the lower symbols pay out between 1.25x and 3x the investment. However, there are no Wild symbols present.

Monster Multipliers slot machine has amazing bonus features that can enhance your chance of winning. When you win while playing, a Cascading Wins feature kicks in to clear the winning symbols off the reels and start a cascade. Then other symbols start to disappear and new ones start to fill in the places. Up until there are no more potential winning combinations in sight, the process is repeated.

When four or more Scatter symbols appear simultaneously on the reels during the base game, the Free Spins feature is triggered. Scatter symbols can appear anywhere. Players advance to the bonus round with 10 initial spins and win an instant cash prize of 1x, 5x, or 10x the stake for landing 4, 5, or 6 Scatters on the reels. The feature can be prolonged because three or more Scatters landing simultaneously during the bonus award an additional +5 spins.

Multiplier symbols enter the scene as soon as the free games are activated. In order to increase the possible payouts, they can appear anywhere on the reels with a random multiplier value of 2x–100x connected to them. When the cascading sequence ends, they remain on the reels for the subsequent spin and double any winnings by the indicated value. If there are numerous bonus symbols, their values are added together.

Little monsters explore a magical land populated by enormous mushrooms in The Monster Multipliers, a game with a playful and youthful vibe. Collapsing Reels, which enable cascading wins, and multiplying symbols, which considerably increase your payouts up to 10,000 times the stake and make the game worthwhile, provide for satisfying gameplay. Play Monster Multipliers slot and win.