Play Mighty Hat Mine O Mine 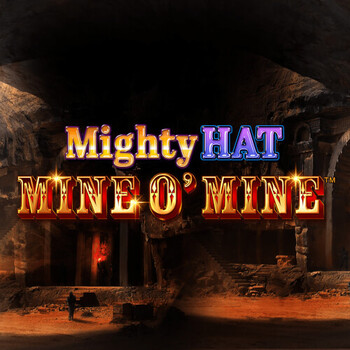 About Mighty Mighty Hat: Mine O'Mine

The second game in Playtech's brand-new Mighty Hat slot series, which began with the Lamp Of Gold version, is titled Mighty Hat: Mine O' Mine slot online. Although the new release centres around the same Mighty Hat feature, it nevertheless offers a few advantages of its own, including a significant change of a twice bigger potential.

With an all-ways pay system and a typical 5x3 reel set, Mine O' Mine commands the screen in Mighty Hat and offers 243 possibilities to play for each spin. In this case, a winning combination is made up of three or more adjacent symbols starting from the leftmost reel. There are 11 regular symbols on the paytable, which are divided into highs and lows. Starting with the traditional A-9 royals on the lowest payline, the premium set of symbols also contains crystals, shovels, canines, an elderly miner, and a female expeditor. Low symbol wins of five of a kind pay 5x your wager, while higher symbol wins pay 25x to 50x your wager.

The may be played on any device and offers a betting range of 0.5 to 500 per spin, making it appealing to all players. Mighty Hat: Mine O' Mine has an above-average default RTP of 96.25 percent and is powered by a maths model with a medium-high level of volatility.

The maximum victory, which pays out up to 2,000 times the bet. It still measures twice as much as the greatest prize from Mighty Hat: Lamp of Gold.

With a ton of features including respins, multipliers, free spins, bonus games, and jackpots, Mighty Hat: Mine O' Mine slot machine has a lot to offer players in terms of gameplay.

The wild lamp symbol will replace any other regular symbol to help you win prizes. One of the following features may be awarded when a Special Lamp shows up on the middle reel at random: