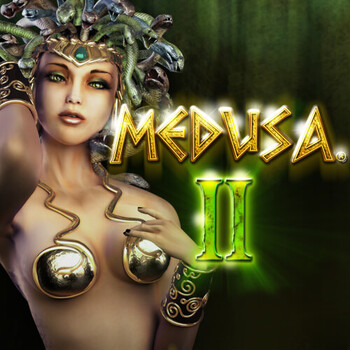 Produced by
NYX
When NextGen develops a sequel to one of its already-hugely successful slot machines, the company always makes it at least twice as good as the original, with the goal of ultimately surpassing the original in terms of both quality and popularity among slot players. The developer had a lot of success thanks to the Medusa slot machine, which had a frightening theme and rewards that were designed for low-rollers. Because of this, the company came up with a follow-up game called the Medusa II slot, which was twice as terrifying and twice as rewarding. It went on to become one of the developer’s most successful games to this day.

The Medusa II slot is a NextGen online slot with 5 reels and 243 ways to win.  The Medusa II slot game is based on the Greek myth, which tells the tale of a beautiful girl who was a priestess of the goddess Athena.  Medusa, sworn to a life of celibacy, marries the god Poseidon.  Athena punishes her by transforming her into a repulsive creature, a Gorgon, with venomous snakes for each lock of hair.  Medusa runs away and lives with her curse, everything she looks at turns to stone.  The Medusa II online slot is set against a stormy, crumbling city of Greece with a soundtrack playing in the background that changes as the reels spin.

During the base game a soldier may appear on the reels to attack Medusa.  Medusa will gaze at him and the soldier will turn to stone and reveal a stack of wild symbols.  The wild symbol will reward players with 500 times their bet for 5, 50 times for 4 and 20 times for 3.

The gamble option may be activated when players land a winning combination.  Players can use the hearts and clubs button to gamble.  Players have the opportunity to double or quadruple their winnings.  If players correctly guess the colour of the card their win will be doubled and if they correctly guess the suit of the card their winnings will be quadrupled.  Unfortunately a wrong guess will mean players lose everything.

What is the maximum bet for Medusa II?

What is the minimum bet for Medusa II?

The minimum bet for Medusa II is 0.25 coins.

Can I play Medusa II on mobile?

Medusa II can be played on mobile devices.

What is the RTP of Medusa II?

What is the biggest potential win for Medusa II?

The biggest potential win for Medusa II is X500 your wager per line.

Play the Medusa II slot machine at the Genting Casino. Genting is a well-established name in the casino industry, with over 40 locations throughout the UK. The online service is now 17 years running and offers both casino and sports betting options.

Genting Casino is licensed and regulated by the UKGC and the Malta Gaming Authority.