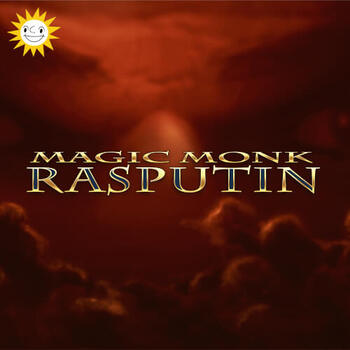 Produced by
Merkur
Merkur's Magic Monk Rasputin online slot game is based on the mysterious Rasputin. This historical Russian character is a mystic, and the game is really dark and scary, with a lot of magical visuals and sounds. This 5 payline 3 row slot offers a maximum possible win of 2,500x the stake. The RTP for Magic Monk Rasputin Slot Game is 94.77% which is really below the market rate. It has a medium variance so you can expect wins of both high and low nature whether on the base game or bonus features.

Magic Monk Rasputin Slot Online is a 5 reel 3 rows slot machine from Merkur Gaming. It offers a 96.2% RTP which is a little over the industry average. The Magic Monk Rasputin slot machine may be played for as little as 0.1 and with bets of up to 5. Powered by a maths model with a medium volatility. The maximum win value is 2,500x the bet, which is reasonable given the risk. The slot has a 3x3 reel setup with 5 different chances to win. The symbols appear on the three reels to the left of the screen. Jewels, magical eggs, and rings set with emeralds and other precious stones are among them. There are also crowns, lending the game a royal aura. Throughout the game, you will occasionally see the monk's face, which adds to the entertainment. The rest of the game is laid out on the screen with all of its intricacies, allowing you to climb the ladders to the major rewards. To win, you must land at least two matching symbols on the reels, however these aren't gathered automatically and added to the three towers on the right.

The first reward ladder includes eight "steps" and gives jackpots ranging from 3 to 40.5x your line bet. You can win the ultimate prize by collecting some of the three ring symbols. Depending on whether you collect two or three symbols per spin, the blue rings allow you to climb one or two steps, the red 2-4 steps, and the green 3-6 steps.

Magic Monk Rasputin is great for new players and can be something that penny slots enthusiasts. Check out this game at Genting Casino. Where there is a selection of thousands of games from leading developers. Genting Casino offers these games at the comfort of your own home or even if you are on the go and looking to have a few spins in. The Magic Monk Rasputin may look mysterious but the maximum possible win is no secret at 2,500x your stake which high-roller can enjoy.