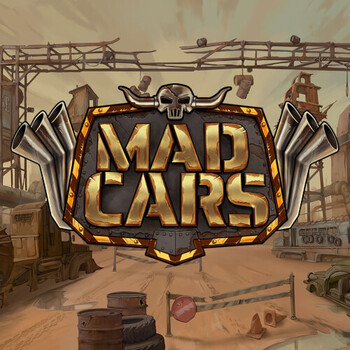 Produced by
Push Gaming
Play the Push Gaming slot machine Mad Cars game to travel to a post-apocalyptic wasteland. Instant Prize Car symbols come with wager multipliers up to 100x and come with 5 reels and 50 paylines. These multipliers are won if the car crosses the finish line. With two Persistent settings, the Mad Bonus feature gives you access to even more Boost Reel symbols. This can result in 25,000x the maximum bet wins. Mad Cars slot game has a return to players rate of 95.36 percent and high volatility. Play Mad Cars for as little as 0.10 to 100 per spin.

Push Gaming is a supplier that has won awards, and the creators did a fantastic job with its new release. The Mad Cars slot online has a vertically-oriented playing area with 6 rows and 5 reels.

There are 50 different ways to win, and in order to be successful, a combination of at least three matching symbols must begin on the leftmost reel.

Additionally, the Mad Cars online slot has a wide range of betting possibilities that are suitable for both big rollers and gamers who favour lower bets. Per spin, the possibilities vary from 0.10 to 100.

The layout's trims have the appearance of iron, spiky poles and are themed appropriately with exhaust pipes. A race track has been set up in the background, which depicts a barren factory.

On either side of the reels, there are abandoned houses and vehicles, and a menacing-sounding tune is playing in the distance. Thanks to the superb graphics, which can further engross gamers, the visuals are improved.

The low-value symbols, which are represented by a severed traffic cone, a wrench, a steering wheel, and a pair of dice, make up the first half of the paytable. The high-value symbols are then represented by character symbols in green, blue, purple, and yellow that have a payout potential of up to 100 times the bet.

The majority of the special symbols, which include scatters, instant prizes, gasoline can symbols, persistent payer symbols, and more, are presented as various race cars.

Due to its highly volatile design, the Mad Cars offer rare but extremely lucrative rewards. The maximum win possibility is likewise appropriate and can reach 25,000 times the bet.

In addition to having fantastic graphics and a distinctive concept, the Mad Cars slot machine has a ton of excellent additional features.

On the bottom row, special Instant Prize symbols could show up at random. They will continue to spin until they reach the additional row on top and produce a payout. Gear or petrol icons might appear in their respective positions on top of the reels when these symbols are on the reels.

Only special symbols may be placed on the top special reel, and there are four possibilities.

If a scatter symbol crosses the top row during this feature, 7 Free Spins will be given. An Instant prize symbol will be added to each reel in place of the regular symbols, which will be removed from the reels. You will get an extra free spin and a new special symbol at the bottom if one of them reaches the top.

The Mad Cars is an all-around entertaining and action-packed game that can be a lot of fun for different types of gamers. The realistic visuals work nicely with the intriguing characters and symbols, and the gameplay itself can be rather lively. This game is worthwhile to try because the maximum payoff is 25,000 times the wager. Play Mad Cars slot and win.