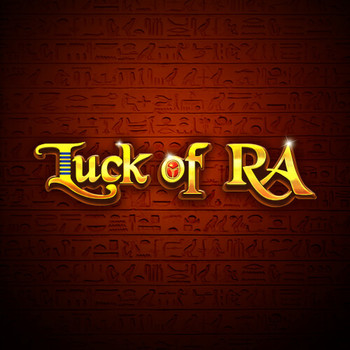 When it comes to the mythological deities of Egypt, Ra presides over them all. Believed to be the King and father of all creation, he represents the sun, the heavens, power, and light. Set out to harness his prosperity and try to gain a fortune of your own with a game in his name, Luck of Ra.

The game starts with a load page featuring Horus, the falcon-headed god of protection, then opens up to a 5x3 reel set with 10 fixed paylines. The screen shows two gigantic statues on both sides, seemingly guarding a flowing river. With high volatility and an overall average payback of 96.06%, you have to rely on your luck to result in victory.

You get a win if you land two or three identical symbols on a payline, starting from the leftmost reel. Low-paying symbols are represented by Tens to Aces card royals that are worth 5x to 10x the bet for five of a kind. While high-paying symbols are represented by more familiar Egyptian symbols: Anubis in Jackal form, a Pharaoh, and a Queen. These are worth 20x to 30x your stake for five of a kind, but you only need two of them to pay out. Horus is the symbol to look out for as a Wild that can substitute for all symbols except the scatter, and is worth 75x for a combination of five.

Other than the Standard Mode, there are two more: the Super Mode and the Mega Mode. Triggering them disables 5 reels from spinning. A tiny wheel with red and green symbols appears. Once you spin, landing on the green while in Super Mode will synchronize the reels for one spin. Landing green in Mega Mode will trigger Free Spins.

Put your explorer hats on because aside from the 3 different modes, there are more extra features that you can discover such as synced reels, mega symbols, expanding symbols, bonus buys and more. TryLuck of Ra on any mobile device with Genting Casino. Play responsibly!