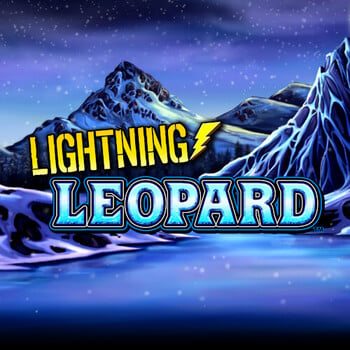 Produced by
Lightning Box
Lightning Leopard Slot Online is a 5-reel, 40-payline slot from Lightning Box Games, transports you to the frozen American wilderness. The streak respins round, in which each matching symbol awards a separate prize, is the highlight of this rather basic game. You'll also have a chance to win one of four jackpots. There are Mini, Minor, Major, and Grand jackpots to be won. Stakes range from 0.40 to 50 each spin. The maximum possible win for Lightning Leopard Online Slot is 1,250x your stake.

The RTP for the Lightning Leopard Slot is 95.52 percent, which is slightly lower than the industry standard. Medium Variance may mean a better frequency of wins with both low and some high value wins. The game's aesthetics and design are simple, but intriguing in that it includes some unusual images that aren't seen in many other games nowadays. You'll notice various well crafted high playing card symbols, such as J, Q, K, and A, as well as snowflakes, huskies, mountain goats, and brown bears, with the canyon in the background. The Native American woman is the most lucrative, paying x7.5 your line stake if you manage to land 5 of them on an active payline. The bonus feature in Lightning Leopard Slot Machine has a twist that can make a big difference in your total victory for the round. The Flippin' Retrigger is triggered when all 15 reel locations are filled with lightning scatters.

After all of the rewards from the first bonus round have been totaled up, the scatters are flipped once more to reveal further prizes. Once the feature is over, the total victory from both rounds is handed out.

The Lightning Leopard Game developers have made a stamp on this game with features unique to the theme. To activate the Lightning Respins, you must land a minimum of six symbols anywhere on the reels.

All ordinary pay symbols are removed from the reels before the feature begins, and the triggering scatters are locked in place. During the game's three respins, your goal is to hit more scatter symbols. Those will be locked in place, and the respin counter will be reset to three. This process repeats itself until no fresh scatters appear after three respins or the entire game grid is covered with scatters.

Following the conclusion of the first part, all lightning scatters in view will flip to show a coin win ranging from 1.25 to 10 times your stake, or one of the four jackpot symbols. The maximum coin win for the round, except any possible jackpots, is maxed at 150x your bet.