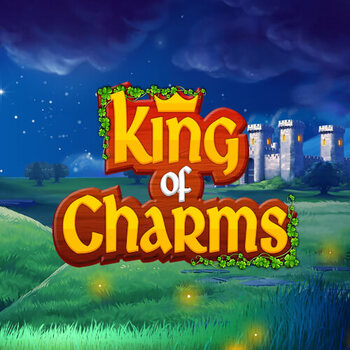 The King of Charms has bold designs and well-considered features, it's well placed to deliver the kinds of in-game experiences that both new and experienced players. It starts on a 5 reel slot with 10 pay lines. You can start placing your bets from a minimum of 0.10 up to a maximum of 100 per spin. It has a considerable Return to Player Rate of 95.51%. Win by landing 3-5 matching symbols. The highest paying symbol is a pot of gold, followed by four leaf clovers, lucky horseshoes and faceted red heart gems.

Any win worth at least four times the in-play stake will automatically trigger the Hot Spins bonus. A Hot Spin is played across four reel sets using the credits from the winning meter. The minimum Hot Spin win value is x4 the original triggering value. If, however, the winnings meter falls below this amount, any wins will be collected and added to the player’s balance before they are automatically returned to the main game.

The Hot Spins feature has the added benefit of bringing the King of Charms mystery symbol into play. When the leprechaun symbol appears on the reels, it will automatically transform into a mystery symbol, which can help players to land more winning combinations.

Sign up for King of Charms at Genting Casino, which is accessible on any mobile device. Always remember to set your gaming budget accordingly and take a few brakes in between.