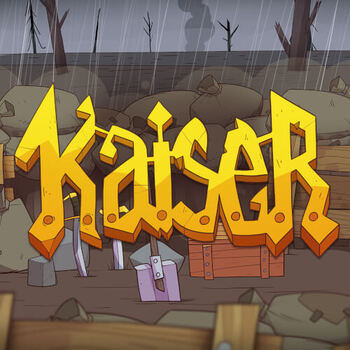 The trenches of war come to life in Kaiser. A World War One-themed slot from developer Peter & Sons, the game gives players a stylized view of life in the war. Derived from the German language meaning Emperor, Kaiser was set in the time of Wilhelm II. The slot game offers a story four years down the track where the players meet lonely soldier Hans Schultz, in 1914, as "the world is shaken by the rolling thunder of marching boots and waves of unstoppable tanks" per Peter & Sons. Looking like a bleak theme for a supposedly fun experience, animators at the studio went the extra mile with the cartoonish art style that sets it apart from other slots.

Kaiser is a brighter recreation of the Great War while staying true to the somber colors of battle. The game protagonist Herr Schultz can be seen among sandbags in the trenches next to a no man's land. Shot-out dead trees are in various shades of grey and brown. The lonesome soldier interacts well with whatever is happening in the 5x5 grid with 40 fixed paylines. An interactive visual aimed at players who will be entertained by Hans' antics as they are by the math model/potential combos. Pertaining to maths, the slot game comes to an impressive 97% RTP while giving medium to high volatility.

Winning combinations occur in Kaiser when three to five matching symbols land adjacently from the leftmost reel. Wilds and multipliers make up the in-game features in the base game as well as a free spins round. The wild multiplier can be randomly placed in any position, activating a win multiplier. Kaiser offers such promise given the unusual theme of World War One with the tasteful animations. Rally with Hans and get the spoils of war and play now!