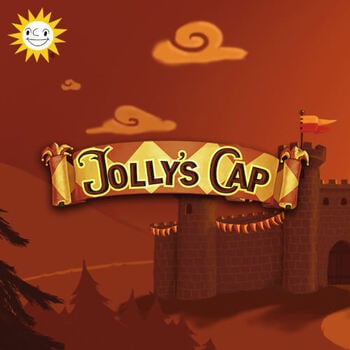 Produced by
Merkur
Jolly's Cap online slot is a Merkur 5-reel, 10-payline classic with an RTP of 96.4 percent, which is higher than the industry average. The game has a maximum win of 10,000x your stake, making it a very rewarding game. The Jolly's Cap game features Wilds and Multipliers and has remained popular due to its simplicity. It is playable from 0.10 to 20. The volatility is medium, which usually means a high frequency of small wins and rare large wins.

The Jolly's Cap online slot kingdom's colourful reels are set against an impressive mediaeval backdrop. A terracotta sunset sky stretches above, and the ancient and imposing castle in the distance can be seen. The reels feature a friendly falcon, a beautiful princess, a noble white steed, the king himself, a jolly laughing jester, and other characters. The colourful reels are also filled with familiar playing card symbols that have been given a royal makeover. K, J, 10, Q, and A have never looked better, drawn in a colourful calligraphic style and bouncing around if you complete a winning combination. The jackpot for at least three consecutive Wild symbols is fixed at 20,000. There are a few common slot symbols that, despite having no obvious connection, look pretty cool in the gameplay setup. The Scatter symbol in Jolly’s Cap slot machine also has Wild capabilities as it also replaces other symbols to create a win.

The main character in the Jolly’s Cap slot is Jolly, he is the Wild symbol, and he will substitute for all other symbols on the reels to form a winning combination. The only one it will not substitute for is the Scatter symbol. If five of these appear on a payline, you will receive 4,000 coins.

Jolly’s Cap is a classic game that you can find at Genting Casino. The site offers a great selection of slots, table games, and live casino games. Genting Casino online allows you to get a few games wherever you are using any device. Jolly’s Cap slot game is a slot machine we highly recommend for many players. It is straightforward and can be a highly rewarding experience. The maximum possible win may be good enough for high-rollers too.