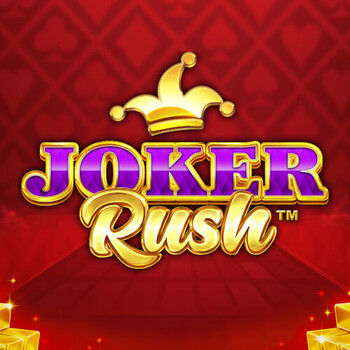 This is not a laughing matter! With Joker Rush, immerse yourself in an adventure where you chase the jolly joker, This classic favorite is played on a standard 5 x 3 reel set with 10 win lines. Players can easily place bets from 0.1 to 400. The reels are made up of 9 regular symbols that are split into three categories, namely high, mid, and low. On the lower side, we see classic card suits, including in ascending order clubs, diamonds, hearts, and spades. The medium lot, in turn, consists of single, double, and triple bars. Next are gold ingots and red lucky sevens, which pay from 2-of-a-kind and more. As for the rest of the symbols, you just need to land at least 3 matching instances on the reels starting from the leftmost to achieve a payout. Five-of-a-kind low symbol wins are worth from 2x to 5x the stake and medium symbols pay from 10x to 50x. Meanwhile, the top two symbols pay 75x and 100x the bet respectively.

Let's go aim for the jolly joker, which acts as both a Wild and a Scatter. Keep an eye out since it can appear anywhere on the reel to substitute for any other regular symbols. Take note,  it has the same value as the top-paying premium symbol, paying up to 100x the stake for line wins. You can trigger the free spins feature by landing 3 or more Jokers anywhere in view. During the bonus, all Jokers turn sticky and remain frozen for the remainder of the feature.

It’s classic stylish design and the upbeat funky soundtrack adds retro touch to the experience. Joker Rush can be played on all mobile devices and is available on Genting Casino. Remember to set your gaming budget accordingly and take a few brakes in between.