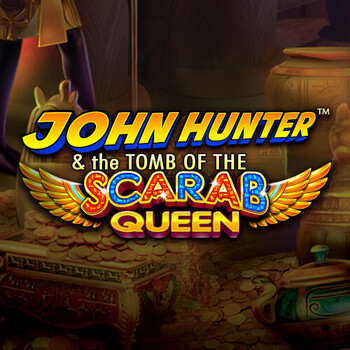 Produced by
Pragmatic
John Hunter and the Tomb of the Scarab Queen is a 5 reel 25 payline slot game from Pragmatic Play which sees the hero journey to ancient Egypt. Money symbols can result in extra credits, up to 25x multipliers, expanding collects, and respins. With the Money Collect option active, there's also a Free Spins feature where you can get an endless number of free spins. Pragmatic Play's online slot, John Hunter and the Tomb of the Scarab Queen, contains a total of 25 paylines. This medium variance slot game offers a 96.5 percent RTP and a maximum payoff of 10500x your wager.. Bonuses and features include free-spins and wild symbols. Players can wager between .25 coins and 125 coins per spin.

The John Hunter & the Tomb of the Scarab Queen slot game is played across five reels, with three rows of striking symbols occupying each reel. The low-paying Ace through Jack royals shine out against the brown reel strips, but it's the premium symbols, such as a briefcase, gun holster, Anubis, and the main character himself – John Hunter, that will catch your eye.

Money Collect feature - lookout for the scarab Money symbol appearing on reels 1, 2, 3 and 4. A random monetary value is associated with each Money sign; if a collect symbol appears on reel 5, one of the following extras will be activated:

Collect - the total value of all Money symbols will be tallied up and a payout will be made.

Expanding Collect – all reels that contain at least 1 Money symbol expand to take over the complete reel with Money symbols. The totals are then totaled and handed out.

Respin Collect - All Money symbols on the reels stay in place while the remaining locations respin in the hopes of revealing new Money Symbols. They are then totalled together and a payout is made.

Free Spins - The Free Spins feature is triggered when three pyramid scatter symbols show on reels 2, 3, and 4 at the same time. Money Symbols can appear on reels 1 through 4 during the free spins round, with all Collect symbols appearing on reel 5.

All Money symbol values are added to a bonus pot positioned above the reels in the top right-hand corner. After the free spins are completed, a massive Money Symbol appears on reels 1-4 with 1 respin awarded – if collect lands on reel 5, the bonus pot is paid out in full. During the feature, 3 scatters can appear to award you with an additional 8 free spins - there is no limit to how many free spins you can earn. How to Play John Hunter and the Scarab Queen Slot Online

To adjust the bet value and enter the bet menu, click the + or - buttons. Choose the amount of money you want to wager. Pragmatic Play's Autoplay option is extremely useful; you may set the number of spins (up to 100) and have the game stop if your balance drops or rises by a specified amount, if a single win reaches a certain amount, if the feature is enabled, or if you get any win. A Quick Spin and a Turbo Spin option are also available.

When you play John Hunter & the Tomb of the Scarab Queen slot online, your goal is to match three or more symbols from the leftmost reel. Wins are computed using 25 preset paylines and stakes to suit all levels of adventurers. The minimal stake of 0.25 should appeal to those who enjoy playing low-limit online slots, while those with larger budgets can wager up to 125.

You bank the total worth of all Money symbols when you "Collect". Before collecting the values of Money symbols, Extra Credit Collect increases their value. Before collecting, Multiplier Collect doubles all values by up to 25 times. Expanding Collect symbols extend to fill the entire reel, giving you more chances to win. Finally, Respin Collect symbols allow you to increase the amount of money in your bag.

What is the maximum bet for John Hunter and the Scarab Queen?

The maximum bet for John hunter and the Scarab Queen is 125.

What is the minimum bet for John Hunter and the Scarab Queen?

The minimum bet for John Hunter and the Scarab Queen is .25.

Can I play John Hunter and the Scarab Queen on mobile?

Yes, you can play John Hunter and the Scarab Queen on desktop, mobile and tablet devices as desired.

What is the RTP of John Hunter and the Scarab Queen?

The RTP for John Hunter and the Scarab Queen is 96.5%.

What is the biggest potential win for John Hunter and the Scarab Queen?

The maximum potential wing is 10500x your stake.

About the Game Provider: Pragmatic

Pragmatic Play is a well-known online slots developer with over 200 HTML games for both mobile and desktop devices. They offer games accessible in 31 languages and currencies and operate in over 20 jurisdictions. Over the years, the firm has won various accolades and continues to develop interesting online slots with unique themes and exciting additional features. Big Time Gaming has licenced the Megaways mechanic to a number of slot companies, including Pragmatic Play. Megaways have been used in a variety of games by the company, both as remakes of successful slots and to offer fresh themes. Independent auditors examine Pragmatic Play games both before and after they are made available to the general public. These audits verify that all of Pragmatic Play's slots work fairly, ensuring that players have a safe and enjoyable time spinning the reels. Mustang Gold, Big Bass Christmas Bonanza, and Buffalo King Megaways are just a few examples of Pragmatic Play's smash-hit slots.

Play John Hunter and the Scarab Queen at Genting Casino

One of the various games offered at Genting Casino is the John Hunter and the Scarab Queen online slot. It has a maximum payout of 10500x your wager. On the site, which has a customer-friendly style, you can enjoy a variety of table games and live casino games. From simple classics to video slots with a choice of bonuses and features, there's something for everyone. You may play John Hunter and the Scarab Queen slot on your iPhone or Android phone. For a thrilling gaming experience, go to the Genting Casino website.