Play John Hunter and the Book of Tut Respin 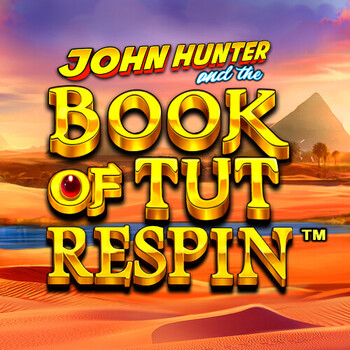 Produced by
Pragmatic
Pragmatic Play's John Hunter and the Book of Tut Respin slot features 10 paylines on 5x3 reels and a risky "book of" mechanic. Regularly chosen at random, Mystery Symbols grow to offer respins when three or more land anywhere in view. The bonus round offers more of the same, with a mystery symbol that is pre-selected and a maximum reward of 4,000 times your wager total. Play Book of Tut Respin for as little as 0.10 and all the way up to 100 per spin.

About Book of Tut Respin

The 5x3 grid and 10 paylines were maintained in Pragmatic Play's John Hunter and the Book of Tut Respin game. This enables players to create winning combos by aligning three to five matching symbols on a payline in a row from left to right.

Book of Tut Respin slot game doesn't have as many features as other slots, other than the upgrading. However, it emphasises respins and bonus spins, giving players the chance to win up to 4,000 times their initial wager. The ideal betting range is 0.10 up to 100 every spin, with the starting bet.

The differences between this remake and the game's original are not substantial. In the base game, the focus is on old buildings, temple ruins, or the desert as a backdrop. In the regular game, it is sunset; in the bonus round, the background features fortunes.

The paytable's low-paying 10-A vehicle symbols range in value from 5x to 10x the bet. The jewellery, a statue of a cat, a sign like a Pharaoh, and John Hunter are prizes with stake values ranging from 30x to 100x.

There are Mystery symbols, though, and they can expand to fill the entire reel. More on that later. The Book scatter also serves as a wild symbol, swapping out for all other pay symbols to form winning combos.

The return to players for John Hunter and the Book of Tut Respin slot online is 96.50 percent, which is higher than the 96 percent industry standard. Due to its extreme volatility, prizes are less frequent but more valuable. Additionally, as was previously noted, the game's maximum victory may be up to 4,000 times the bet.

Amazing features are found in the Book of Tut Respin online slot. A random pay symbol is frequently chosen by the book in the base game, while the premium symbols pay between 30 and 100 times your stake for 5 of a kind wins. For that spin, the chosen symbol serves as the mystery symbol; to activate the mystery respins feature, you must see at least three instances of the mystery symbol anywhere in view.

As a wild, the book symbol replaces other pay symbols to help players complete winning combinations. It also functions as a scatter. To activate the Bonus Round and receive an initial scatter payout of 2x, 20x, or 200x your bet, you must have 3, 4, or 5 of the scatter symbols in view. In either case, you are awarded 10 bonus spins, and the mystery symbol for the feature is a pay symbol that is chosen beforehand at random.

When enough occurrences of the Mystery Symbol land, it expands to fill the reels in the same manner as previously explained. When three or more book scatter/wild symbols appear during a bonus spin, the remaining reels are re-spun, and you are awarded an additional 10 spins.

The game Book of Tut Respins slot machine is excellent. The soundtrack is pleasant, and the pictures are clear. However, despite the fact that the maximum win possibility in the original slot machine is bigger, you must go further and realise that the likelihood there is 1 in over 1 billion spins. This situation has a maximum win probability of 1 in 10,204,081, which is far better. Play Book of Tut Respin and win big.