Play John Daly Spin it and Win it 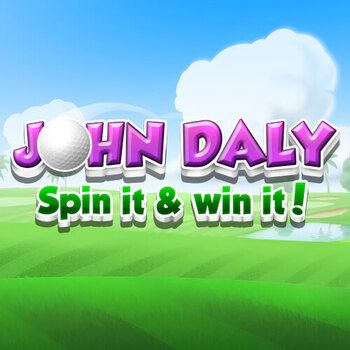 Produced by
Spearhead
John Daly Spin it and Win it slot game is developed by Spearhead Studios. Fans of golf and John Daly himself, would find this slot engaging and interesting. This golf-themes slot is played on a 5 reel slot with 243 ways to win. Most players, especially newbies will appreciate the reel’s simple outlines. The background is a sprawling golf course and on the left side, stands an animated John Daly. An entertaining soundtrack complements the game with John Daly swinging his hips to the beat. John Daly Spin it and Win it game is playable on most mobile devices.

About John Daly Spin it and Win it

John Daly Spin it and Win it Features

When the bonus mode activates, you can select one of three available features. You now have an option to accept the picked feature, or gamble it to play a different extra. You can also reject the feature, which means you can no longer select it at random. Instead you receive a mystery prize.

The golfer takes a swing and it displays a multiplier and it increases as the ball moves upwards. The ball can either collide with something or continue soaring until it reaches 20000X your bet.

Starts with 8 initial bonus games. 3 scatters will retrigger the feature. This also comes with normal and sticky wilds with multipliers of X2, X3.

Players get 10 free spins on a new 5X4 layout with cash balls, multicoloured balls, and blank positions on the reels. Cash prize balls will lock on each spin, the gold balls add x1 multiplier, and multicoloured ones get 2 to 4 extra spins. This feature ends when all holes are filled or when there's no more free spins.

John Daly Spin it and Win it at Genting Casino