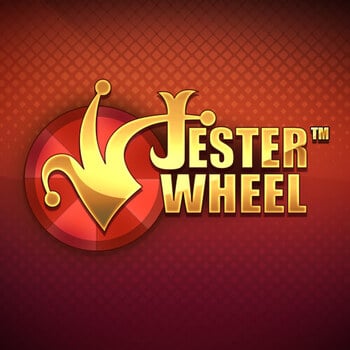 Rabcat’s Jester Wheel slot machine is designed to be reminiscent of classic-style slot games, especially with the symbols you can see on the reels. Among the game’s symbols, you’ll see fruits such as lemons and cherries, a 4-leaf clover, a bar logo, gold bars, a red seven, a bell, a diamond, and the Jester which is the game’s Wild symbol that can substitute for all symbols in the game except for the Scatter. The highest symbol aside from the Wild is the diamond.

As you play Jester Wheel, you may encounter the game’s Scatter symbol which is represented by the Jester Wheel Bonus symbol. This symbol is needed to activate the game’s signature Jester Wheel bonus feature and Jester Free Spins.

This is the signature feature of the Jester Wheel slot online and is activated by landing at least 2 Scatters anywhere on the reels. You get 1 Bonus Spin off the bat and one of the 4 bonus features is randomly selected by the wheel. The selected feature is then played out automatically. There are four features you can trigger from the Jester Wheel: Jester Burst, Jester Reel, Jester Trail, and Jester Mirror.

In the Jester Burst feature, you get 2 to 6 wilds added to the reels in random positions. The Jester Reel feature gives you 1 to 3 reels which are randomly filled with the Jester Wild symbols. If the wheel gives you the Jester Trail feature, a Wild symbol is randomly placed on the reels and will walk along a random path leaving Wilds along its path. Lastly, the Jester Mirror feature fills Reel 2 with Wild symbols and paylines will pay from both sides, but only for the current spin.

If you can land 3 Scatters anywhere on the reels, the Jester Free Spins feature is triggered and you get 8 Free Spins. During this bonus feature, one of the Jester features mentioned above is active for the entire duration of the free spins. In this feature, you won’t see the Jester Wheel. Instead, it will be replaced by a Multiplier Wheel which can have multiplier values ranging from x2 to x10.

Those who play Jester Wheel slot are sure to enjoy the classic-style graphics and reel design, but most especially, they will enjoy the Jester Wheel and the bonuses they can receive from it as well as the Jester Free Spins with a Jester bonus feature on for every spin. Ready to party with a joyful jester? Come on over to the Genting Casino website and play the Jester Wheel game! Get a chance to win up to 2,146x your stake while enjoying exciting bonus features!