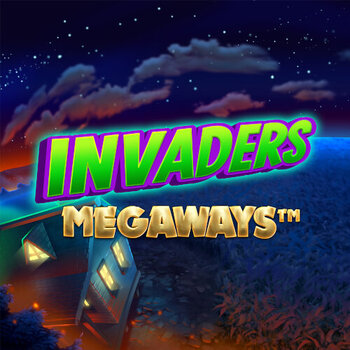 The sky is falling! It’s going to be a long night for a regular household living in the middle of a crop field, there are crop circles everywhere and the moonlight shines with a red and blue gleam. Creatures not from this world have arrived and they’re eager to meet hoo-mans in a game of Invaders Megaways.

Set in a 6-reel grid that can show 2-7 symbols each, this highly volatile game comes with a theoretical Return to Player of 96.30% and up to 117,629 ways to win during the base game. Landing 3 matching symbols from left to right adjacently constitutes a win.

With the Cascade system, each symbol in a winning combination is removed making way for more possible wins from new symbols. This can go on until there is no more win in sight. On top of the reels is another grid that shows all the paying symbols; a UFO stops in front of a random symbol after every spin. Then, all identical symbols from reels 2-5 will become a Wild for that spin.

A Unicow can appear anytime during the base game, which will increase the winning paylines to 1,000,000 by displaying 7-10 symbols per reel. You can also trigger the Free Spins feature by landing 4, 5, or 6 red planet Scatters for 7, 10, or 15 spins. A random picture will be selected for each pin which activates any of five modifiers: logo, scientist, alien, cow, or ray gun.

Invaders Megaways is playable on any mobile device with Genting Casino.Set your budget and represent mankind, but don’t let them take you away. Play while it’s fun, not futile!